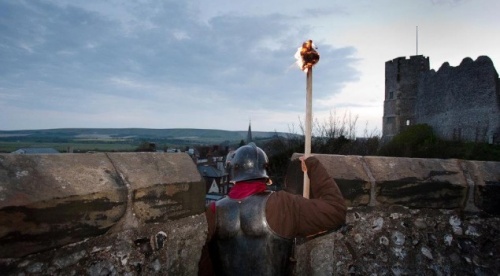 By the afternoon of 14th May 1264, the town was ablaze and the King's knights valiantly fought from the walls of Lewes Castle to hold off the rebels. Reproduction courtesy of Sussex Past.

Whilst we may be in the midst of Brighton festival madness our neighbours in Lewes also have some pretty extensive plans in place for May. Not the Festival, the Fringe or even the Great Escape, but the Battle of Lewes 750, designed to commemorate events that took place in May 1264 which, some believe, shaped the future of democracy in this country.

Commemorating armed struggle, even if it is aimed at getting better, fairer government, is pretty serious stuff at any time, but, reassuringly, the Lewesonians are adopting a fun approach to their festival - not at all the experience of their forebears for whom the battle was a bloody, horrible affair. And, of course, today’s residents understand that. There cannot be one who does not know the story of the Battle of Lewes. However, unlike Harvey’s beer, I’m not sure this story has travelled.

So, to set the scene: the reign of Henry III was not a happy one. His strict autocratic style, reliance on foreign advisors, displays of favouritism towards unpopular French nobles, and profligate spending made him deeply unpopular. In 1258, tired of years of bad government, the barons, under Simon de Montfort, the Sixth Earl of Leicester, took action and imposed a scheme of constitutional reform, known as the Provisions of Oxford, on the King. This established the principles of government by council rather than by royal whim. But Henry wasn’t the sort to just roll-over and accept restrictions on his authority. He asked King Louis IX of France to act as an arbitrator and in January 1264, Louis announced the annulment of the Provisions and dismissal of the reforms. This in turn set in motion nothing less than a civil war.

Some accounts say that de Montfort believed, with an almost crusading zeal, that he should uphold the oath sworn in 1258, by ‘all faithful and loyal men’, to support the reforms and treat all who opposed them as mortal enemies. He wanted to shield and defend the English against the terrible threat he felt was being imposed on them by foreigners; going as far as to sign a statute which aimed to confine high office to native born men and expel all foreigners from the country. Which is a little odd; bearing in mind he was French and could speak hardly any English! Perhaps he was just a very canny politician who recognised the xenophobia growing throughout the country and thought to channel it as a way to power. Indeed, historians have described de Montfort as extremely political, power hungry and a dynamic leader. Qualities well suited to unifying disaffected knights, barons, freemen and peasants to stand against the ‘tyranny of aliens’. Hostilities started with both sides galloping around the countryside, taking castles loyal to their enemy and gathering support. By May 1264 the King’s forces had reached Lewes and here de Montfort attempted to negotiate a peace. His proposals were rejected and, in this situation, the only thing to do next was fight.

On the eve of the 14th May, King Henry was settled in Lewes Priory enjoying the Feast of St Pancras while his son, Prince Edward, was being entertained at Lewes Castle by John de Warenne. Their armies were billeted in the town or camped in tents outside the town walls. Unseen, de Montfort’s men marched quietly uphill from Warningore Wood and around Black Cap to Mount Harry (just over a mile to the north-west of Lewes) from where they had an excellent view of the town. At dawn, the King’s army struggled up Winterbourne Hollow to meet de Montfort’s troops, roughly around the area of Lewes Prison, the old race course and Landport Bottom. De Montfort was heavily outnumbered and Edward easily overpowered his inexperienced left flank. These men, mainly apprentices and journeymen, known as ‘the Londoners’, fled for their lives and were chased all the way to Offham chalk pits. Many drowned trying to escape across the River Ouse.

When Edward returned to the field he discovered that his cavalry’s killing spree had left the King exposed and the battle was all but lost, with Henry ‘much beaten with swords and maces’. Fighting spilled over into what is now Lewes High Street and School Hill. Soldiers in the castle fired flaming arrows into the thatched roofs of the houses below in order to stop de Montfort’s troops taking up positions there. One chronicler wrote of the horror of ‘the town on fire, and its streets filled with objects of indiscriminate slaughter.’

This was an epic battle. It ended with Henry, his troops having fled or died, being forced to surrender. De Montfort had overthrown the King and was victorious. The following peace treaty, the Mise of Lewes, enabled de Montfort to call Britain’s first ever recorded parliament to include elected commoners and make a move towards a more democratic England.

Perhaps not the whole truth, but if you want to escape Brighton at some point during May you can go to Lewes and find out for yourself. For full details of all the events go to http://sussexpast.co.uk/battle-of-lewes-main. I’ll be going over on the 17th for the costumed march through the town which will feature re-enactors ‘skirmishing’ at Landport Bottom, Lewes Castle and the Priory – I love a skirmish! Followed perhaps by the mystery play in, amongst other locations, Harvey’s yard. 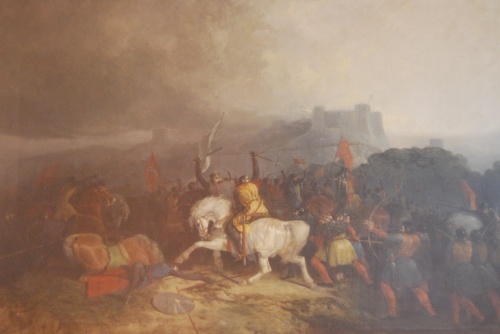 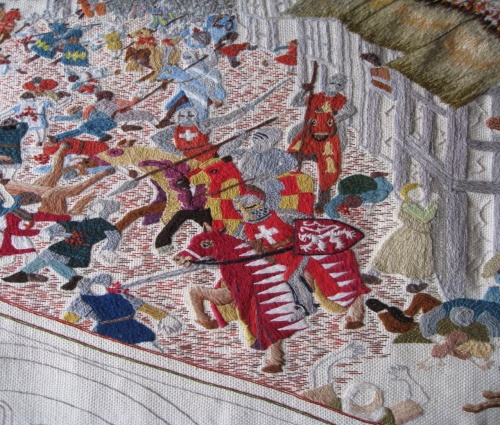 A definite must see is the specially designed tapestry stitched by local embroiderers. Based on drawings by Lewes artist Tom Walker, the tapestry tells the story of the battle using 13th century embroidery techniques. 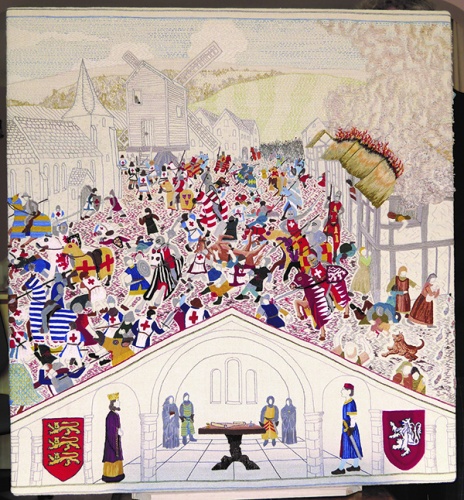 Tapestry panel 3. The Barons War, as the conflict became known, was not over after Lewes. Prince Edward escaped from his captivity and routed and killed de Montfort at The Battle of Evesham in 1265.