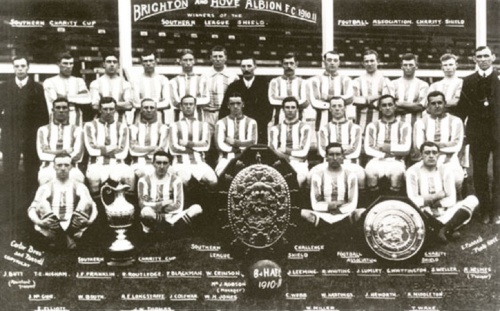 The club played their first Premier league game, a 2-0 defeat, on Saturday 12th August, 2017 – against the planet’s richest club, Manchester City – at their world-class stadium in Falmer. Back in 1897, the first whiff of professional football circulated in the twin towns when Brighton United were formed and competed in the Southern League. Interest was low and they folded before completing their second campaign, to be usurped by Brighton & Hove Rangers. The amateur outfit played at Withdean but dissolved before their inaugural season in the Southern League in 1901/02. On Monday 24th June 1901, United’s former boss John Jackson decided to go for third time lucky and chaired a meeting at the Seven Stars public house in Ship Street: Brighton & Hove United were born. Taking up Rangers place in the Southern League, ‘United’ became ‘Albion’ before a ball was kicked, due to rumblings from Hove FC, who they would eventually oust from the Goldstone in 1904 – the same year the famous blue and white stripes were adopted.

In 1910, Albion lifted the Southern League title, which meant a Stamford Bridge date with Aston Villa to contest the Charity Shield – much more important in those days and played between the winners of the country’s two professional leagues. A late goal from club legend Charlie Webb and the Albion were crowned the ‘Champions of England’.

Another crucial bit of Albion history materialised around this time: a march written by William Ward-Higgs – Good Old Sussex by the Sea – became the club’s anthem. It’s still played to this day as the teams run out at the American Express Community Stadium.

Albion entered the Football League, in Division Three (South), in 1920 and it’s fair to say they didn’t exactly set the world alight over the next four decades. Apart from Tommy Cook’s net bulgers, Hugh Vallance’s confidential indiscretion that cost him his job (after banging in over 30 goals in one season), and club secretary Albert Underwood forgetting to enter his team into the 1932/33 FA Cup, resulting in entry at the preliminary stage and heavy victories over local rivals, including a 12-0 trouncing of Shoreham, Albion plodded along quite happily until 1958, when promotion to the Second Division was finally secured for the first time when local lad – and reserve team striker – Adrian Thorne smashed in five to beat Watford 6-0 at the Goldstone. Fans were flocking to Hove and 36,747 – the largest ever home gate – welcomed Fulham on December 27th 1958. The momentum on the pitch couldn’t keep up with the growing attendances and Albion suffered consecutive relegations and ended up in the bottom tier by 1963.

With the club in the doldrums, something rather spectacular happened: a full England international, Bobby Smith, signed for manager Archie Mccaulay. In today’s footballing landscape, it’s the equivalent of Jamie Vardy signing for Forest Green Rovers in League Two.

The big striker’s goals played an important part in promotion, which was achieved again in 1972. One season in Division Two and it was back to familiar territory in the third tier. Then Brian Clough arrived briefly, and left, to be followed by ex-England captain Alan Mullery – and Peter Ward. Two promotions, plus the Palace rivalry intensifying, and Albion made it to the top flight for the first time in 1979 – and were duly thrashed by Arsenal.

Now the Seagulls, a combination of negative management, nationwide hooliganism and simply not being good enough and the four-year sojourn was over. Not before Jimmy Melia, and his white shoes, flew into Wembley Stadium by helicopter in 1983 for one of the most unlikely FA Cup final appearances in the famous competition’s history. Gordon Smith missed a glorious chance in the last-minute of injury time to beat Manchester United. It finished 2-2 and the Red Devils scraped through the replay, 4-0.

The subsequent relegation saw an inexorable decline, punctuated by a Barry Lloyd-inspired trip to Wembley in 1991, and a play-off final defeat to Notts County. In 1995, fan Paul Samrah discovered the club’s articles of association had been altered by despised chairman Bill Archer to allow the sale of the Goldstone Ground for profit. All hell broke loose. A riot, protests, marches through London and Brighton, Fans United, walk-outs and pitch invasions: 1996/97 in a nutshell. Robbie Reinelt – who will never have to buy a drink in Brighton again – scored in the league-saving final-match-of-the-season draw at Hereford United, relegating the hosts to the Conference. But where would homeless Albion compete in the fourth tier during 1997/98?

Two completely soul destroying years ground-sharing at Gillingham followed, watching appalling football and campaigning vigorously to return home to Sussex. Led by Dick Knight, a diligent band of supporters started the Bring Home the Albion campaign. It worked, and in 1999 home games were to be played in Brighton again; at Withdean Stadium. Micky Adams built a team of winners and back-to-back divisional championships were secured – with goal-machine Bobby Zamora leading the line – to bring second-tier football to the coast for the first time in a decade in 2002. Off the pitch, chairman Dick Knight was leading a diligent, passionate and dedicated team of supporters as they set about convincing the council, residents, and government that a new stadium should be built. Thousands of letters were written, a political party was formed, countless leaflet drops, flowers to Downing Street from 91 clubs, postcards… A solitary season 2002/03 was spent in the Championship, under Steve Coppell, before a play-off final triumph at the Millennium Stadium in 2004. Meanwhile, due to a minor detail involving a pie (yes, really), Deputy Prime Minister John Prescott’s decision on the new stadium was deemed invalid and it was back to the drawing board.

A public inquiry lasted months and a second concluded Falmer was the only viable location for a new ground – ten years after the site was initially proposed in 1997.

Tony Bloom took over from Dick in 2009, personally financing the Albion’s new home to bring down the curtain on 12 years – of no roof, rain, ponchos, an away end in Worthing, temporary seats, badgers, etc – at the Theatre of Trees (aka Withdean).

An emotionally charged crowd of over 20,000 witnessed the grand opening of the Amex – a 2-1 victory over Doncaster Rovers – on August 6th, 2011.

There is an incredible team spirit and camaraderie at the club and among the fans; borne from the troubles, and exile in Gillingham. Calm and calculated manager Chris Hughton perfectly complements the shrewd business acumen and unbridled enthusiasm of Tony Bloom.

Can the Albion stay in the Premier League? 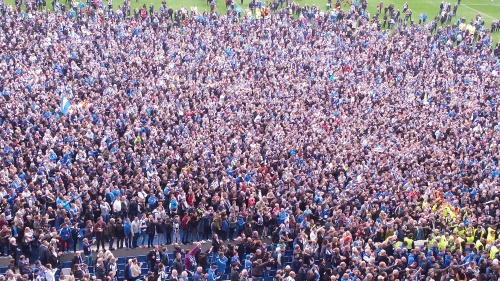 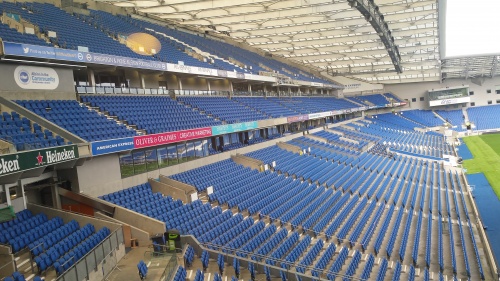