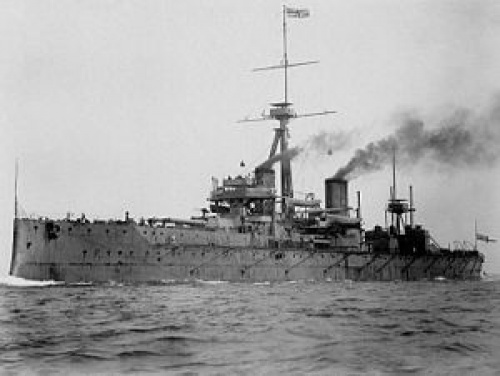 On Tuesday 30 June 1914 eight giant battleships anchored off West Brighton and a naval seaplane from the hangar at Volk’s Railway flew over. No-one realised that within a few weeks this squadron would, as part of the Home Fleet, be challenging the German navy and that hundreds of the sailors would die.

There is something very appealing about looking back exactly one hundred years. It’s just beyond our memory, but was, nevertheless, experienced by people who lived in the houses we now live in, sent their children to the schools we went to, visited the parks, cinemas and theatres we still enjoy. And in the summer of 1914, despite rumours of war, Brighton was a busy seaside resort playing host to holiday-makers, day trippers and those looking for fun, just as it is today. In fact, Brighton was experiencing a bit of a tourist boom, benefitting from the very natural disinclination on the part of many to risk Continental travel.

And fashionable Brighton had much to offer. In late June/early July there was a magnificent naval occasion when eight battleships - Super Dreadnoughts no less – arrived off West Brighton. They had come to “show the flag” and prove just who “ruled the waves”. They were met by a flotilla of small boats, packed with residents and visitors anxious to inspect the vessels and on the first evening, Tuesday 30th June, thousands watched as the giant ships turned on their searchlights and swept the seafront buildings with beams of light. For the next two days the town entertained the ships’ companies with dinners, concerts, music hall shows and pints in the pubs; a true Brighton festival of entertainment, drinking and dancing.

For those who liked a different kind of fun, there was shopping! Indeed, Brighton had quite a reputation amongst those keen to indulge in a little retail therapy. Shops in North Street and Western Road were particularly exciting and everywhere that summer had a “Great Sale”, with bargain prices on everything from ready-to-wear holiday robes, to “Sussex” lawn tents and pianolas.

Routes from London to Brighton were well established by this time. Some visitors travelled by motor omnibus, some had the means to ‘motor’ down themselves, but the vast majority came by train. The London, Brighton and South Coast Railway Service had, of course, made it possible for many not just to visit, but to live in Brighton and commute to work in London. And advertising boards for house agents, such as Parsons & Sons, give an idea of the kind of prices these commuters might have expected to pay. On the 1st August 1914 a compact villa in Preston Park was advertised for £635; in Preston Village, a four bed villa was £323; and a double fronted residence in Florence Road was £925. For those looking to rent, £45 per annum would have secured them an exceedingly nice house, with motor garage, in Springfield Road or, more centrally, a first floor flat, a few minutes from the station with all modern conveniences, including electric light, for £70 per annum.

But, as we know, the cost of housing cannot be used as an indicator of social prosperity and hidden away, behind the expensive villas, were swathes of people living below the poverty line in slum housing. Poverty, among the urban working class, especially the unskilled and those with large families, was endemic – they simply had insufficient income to meet their needs, despite long hours and strenuous work.

Work could be found and not only in the service industries – retail, hotel and catering trades. Brighton was more industrial than other south coast resorts and employment was available in artisans’ workshops, small factories, breweries, the gas works, Cox’s pill factory and, the largest industrial employer of them all, the railway company, including Brighton Railways Works.
Without unemployment or social security benefit, those who could not manage were forced to apply for Parish Relief. Worse was the Workhouse, which in 1914 became known as Brighton Poor Law Institution. There was a regular soup kitchen in Cobden Road where a quart of soup cost 2d. London Road Congregation Church still ran a Blanket Society and, according to contemporary newspaper accounts, the Brighton Children’s New Year Boot Fund were busy considering pages of names, put forward by school teachers, of children most in need of the charity’s boots.

Neither the darkness of this poverty, nor the threatening storm clouds of war seem, however, to have diminished Brighton’s August Bank Holiday weekend – ‘Sussex Fortnight’ was in full swing. The Guardian newspaper reported that the seafront was “black with people”. Both the Palace Pier and the West Pier were thronged, and there were “as many pretty frocks as ever to be seen on Hove Lawns”. There was a three-day race meeting and a big flying carnival at the Brighton and Shoreham Aerodrome. The theatres offered a wide variety of shows: ‘A Pair of Silk Stockings’ at the Theatre Royal, ‘The Belle of New York’ at the Palace Pier and ‘Broadway Jones’ at the Palladium Opera House.

Right up to and including the August Bank Holiday weekend, Brighton’s slogan really was “Business as Usual”. Whilst others might have been contemplating the lamps going out all over Europe, the Brighton and Hove Gazette announced, “Brighton has resolved to keep smiling.” 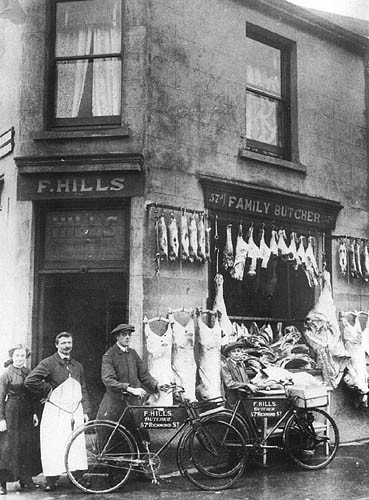 57a Richmond Street around 1914. Pre-war the average male weekly wage varied from 26s 4d per week to 34s 4d. Half the women employed were paid from 10s. to 15s. per week. Photo reproduced courtesy of My Brighton and Hove www.mybrightonandhove.org.uk 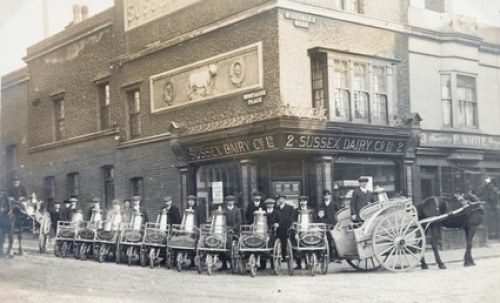 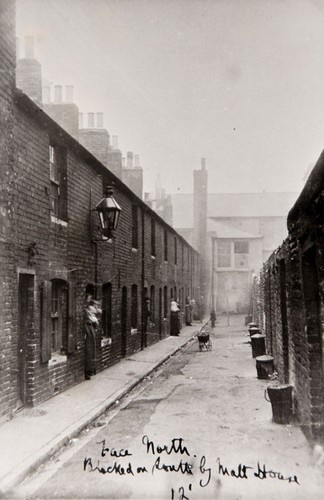 Slum dwellings looking west from upper Bedford Street to All Souls School showing the back walls, and the dustbins of Essex Street. Brighton in 1914 was a town of extreme poverty and wealth. Photo reproduced courtesy of James Gray Collection /The Regency Society. 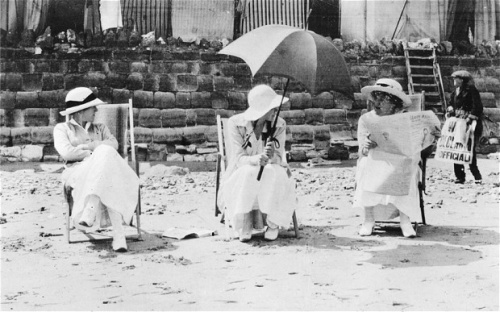 A newspaper seller whose board announces the declaration of war passes ladies on a beach somewhere on the South Coast. A state of war existed between Great Britain and Germany as from 11 p.m. on Tuesday 4th August 1914.