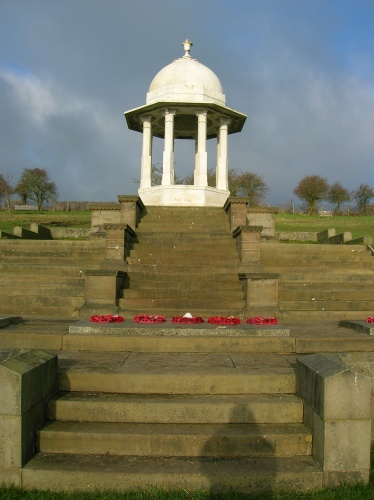 It was not so much a New Year’s Resolution, more a need to break the invisible hold the kitchen had gained over me in the last couple of weeks, that made me think about visiting the Chattri. I have never been there before and, for someone who professes a keen interest in all things connected to the First World War, I felt that it was time to rectify this. I must say though that, as soon as I had parked the car and started across the fields, I did feel that perhaps I had made a bit of a mistake. But, in truth, the walk was easy, even for a “non-walker/townie” like me, and after about 30 minutes I came to the Chattri, the resting place of 53 Hindu and Sikh soldiers who died in Brighton and were cremated on the Sussex Downs near Patcham during the early part of the First World War.

Over one and a half million Indian army soldiers fought alongside British troops and for a brief time Brighton had a special association with some of them. In fact, twelve thousand Indian soldiers who were wounded on the Western Front were sent to hospitals set up in the Royal Pavilion, the Dome, the Corn Exchange and York Place School. The last convalescent Indian soldiers left Brighton in February 1916.

The Chattri stands in memory of all the Indian soldiers who died during the war, but most particularly those who were cremated on this spot, their ashes then being scattered in the sea in accordance with their religious rites. The original idea for such a memorial is attributed to Lieutenant Das Gupta of the Indian Medical Service, who approached the mayor of Brighton, John Otter, in August 1915. Otter seems to have understood the political and historical need to preserve the memory of the Indians who had died in both France and England and in 1916 took Das Gupta’s idea a step further by proposing two memorials; one to be erected on the ghat, the site on the Downs, the other in the centre of the town to commemorate Brighton’s link with India.

The land for the Chattri, the property of the Marquess of Abergavenny, was conveyed to the County Borough of Brighton in July 1916 and it was agreed that the India Office and Brighton Corporation would share the cost of erecting the memorial, but that Brighton alone would be responsible for ongoing care and maintenance. (The second memorial, the southern gateway to the Pavilion, was paid for by subscriptions raised in India.) The architect Colonel Sir Swinton Jacob sketched out a chattri, a traditional Indian style of memorial, and E.C. Henriques, a young Indian architect just completing his studies in England, undertook the design.

Completion of the work did not, however, go smoothly. Implementation of the design needed considerable thought, bearing in mind cost of materials and the position on the Downs, “exposed to the action of the weather, and to the ill treatment of mischievous boys.” Further delays were experienced due to problems with the joint financing of the venture; with labour shortages caused by urgent National work taking precedence; and with the Italian marble contractor refusing to honour his contract owing to war conditions in Italy. By the end of 1920 workmen had completed the memorial, caretaker’s cottage and surrounding turfed garden, which incorporated four miniature avenues of red and white thorn trees pointing north, south, east and west. The Duke of Connaught (seventh child of Queen Victoria and a professional soldier who had served in India) unveiled the memorial on 1st February 1921. The end cost of the entire project was £4,964.

Although the Chattri was a Brighton Corporation initiative, what happened over the next two decades did them no credit. There is evidence of concern for the care of the Chattri in the decision made in 1923 to employ an on-site caretaker, but this former regimental sergeant major died a few years later and he was not replaced. Neglect and unwillingness on the part of the Corporation to take responsibility for ongoing maintenance eroded and damaged the site. In 1942 complaints were still being regularly voiced about the dilapidated condition of the memorial, but by this time the land had been requisitioned as part of the Downland Training Area and it had become a WWII “battle training ground”.

Happily, when the land was derequisitioned in 1946 the War Office accepted the charge for repairs and agreed to restore the Chattri to its original condition. In 1951 the British Legion started an annual pilgrimage to the Chattri, only stopping in 1999 when declining numbers and, I expect, the relative remoteness of the location meant they could not continue. Since June 2000, Davinder Dhillon, a local Sikh teacher, has ensured that a fitting memorial service is maintained with representatives of the Undivided Indian Ex-Service Association present, as well as the Brighton and Hove Hindu Elders Group, members of the armed forces and police, the mayor and local people.

So here is my New Year’s resolution - to try to become more involved in local, community events and to enjoy the walk there and back and not be scared of the cows!