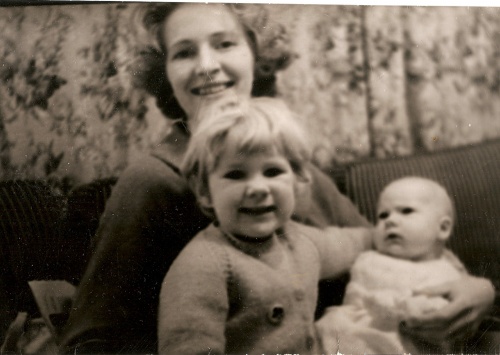 Visiting Santa and Uncle Holly in Selfridges’ Christmas grotto was a tradition for many children. Jayne wears her Uncle Holly badge in this photo, December 1962

The rampant consumerism at this time of year can seem excessive, almost overwhelming, and yet the avalanche of marketing and merchandise is not entirely new, as Christmas shopping has been big business for generations. Well over a century ago, advertisements for seasonal goods loomed large on billboards, sandwich boards and posters, filled handbills and periodicals, while many shops began stocking their festive fare in September or October.

Commercial announcements in the press date back centuries, with pictorial advertisements becoming more common in the late-1800s, providing Victorian readers with a visual impression of articles previously described in words. By the early twentieth century daily newspapers, special-interest magazines and other printed publications regularly featured Christmas notices that combined eye-catching images, bold brand names and earnest captions to draw attention to products ranging from mops to Meccano. Publicity reached new heights in the 1950s with cheerful modernist advertisements enhanced by catchy slogans that reflected the influence of American culture and rising consumerism. Surviving images from Christmases past reveal that the goods promoted 50-100 years ago were in many respects similar to those we favour today: alcohol; fine foods and confectionery; mechanical and electrical gadgets like cameras and high-end toys; nightwear and lingerie; fashionable winter wear; perfumery and cosmetics.

Long before the internet or even TV, local general shops or grocers throughout the country would, by autumn, have ordered in supplies of dried fruit, nuts, candied peel, brandy and other ingredients for the Christmas cake, pudding and home-made mincemeat that were traditionally cooked at home. Vinegar was sold by the pint from barrels, for the pickling of onions, red cabbage and beetroot, in preparation for the Boxing Day buffet. Later, in December, appeared crackers, biscuits, cakes, chocolates and sweets, packaged in picturesque painted tins and decorated boxes, some of the more exotic provisions only available at Christmas and New Year, such as sticky dates, figs, Turkish delight, sugared almonds and marzipan fruits. Oranges and other fresh fruit would be wrapped in coloured paper and attractively displayed, while chestnuts for roasting and Christmas ‘small nuts’ - as brazil nuts, walnuts, almonds etc. were sometimes called - overflowed from sacks. Cinnamon sticks were displayed in jars on the counter and the air hung heavy with the scent of cloves, nutmeg and mixed spice.

Prior to stringent health and safety regulations, local shop interiors and windows were stacked high with enticing goods – not only seasonal foodstuffs, but also Christmas cards and crackers, luxury indoor fireworks and modest gifts such as pocket handkerchief sets, boxed soaps, small dolls and lead soldiers. Many shops also stocked the kinds of traditional Christmas tree decorations that pre-dated modern fairy lights - coloured glass baubles, candles and sugar mice. There might be other festive ornaments too, such as paper lanterns and ornate bells and balls to hang indoors, and reams of fancy wrapping paper, brown parcel paper and string. Posters around the shop advertised the special offers available and assorted seasonal goods – everything for the provincial customer at Christmas.

It was in the 1870s that shopping for Christmas presents began to evolve as a significant seasonal activity. By the late-Victorian era shopping played a major role in the English Christmas tradition, especially the purchase of toys from the burgeoning urban department stores. Large stores themselves lost no time in developing the vast retail potential of the season, Bon Marché of Liverpool reportedly the first to launch a ‘Christmas Fairyland’ complete with themed displays, shows and grottoes in 1878, soon after the store opened. Another early ‘Christmas Grotto’ appeared in J P Robert’s store in Stratford, East London, in 1888, and subsequently shopping arenas geared towards children, often called ‘Christmas Bazaars’, were installed in retail emporia up and down the country during the 1890s and early 1900s. Each tried to outdo its competitors by staging ever more elaborate events: for instance, one year Bentalls of Kingston hosted an in-store circus, including live animals. Selfridges (established in 1909), known for its artistic window displays, always created magical Christmas window settings, and still does today.

The personal appearance of Father Christmas/Santa Claus was the highlight of many department stores’ Christmas grottoes and queuing up to see him and receive a present remains a nostalgic childhood memory for many. Visiting Father Christmas and his sidekick, Uncle Holly, in Selfridges’ Grotto was our tradition as small children in the 1960s, when we travelled from our village to London (initially by steam train), wearing our ‘Sunday best’ for the occasion. When it was our turn to meet Santa, we bashfully accepted a brightly-wrapped present from the white-bearded gentleman and a round badge portraying Uncle Holly in his green Dickensian costume, for we were proud members of the Uncle Holly Circle.

The Christmas experience at Hanningtons department store that once stood on the corner of Brighton’s North Street and East Street holds a special place in many people’s hearts. One mother who accompanied her children during the 1970s and 1980s recalled how an elf (a lady she knew, decked out in green tunic and tights) took them in a magic ‘lift’ that didn’t actually move, but served as the entrance to Santa’s grotto. Others who knew Hanningtons at Christmas remember mice dressed in nineteenth-century costumes and a frosty cave furnished with fur trees, icicles and snowmen. Author Alexandra Brown, born in Brighton, based Carrington’s, the fictional department store of her books, on Hanningtons, describing on her blog the entry into Lapland and route ‘along a corridor swathed in snow and twinkly lights’, to Father Christmas, who took her hand-written Christmas list, before giving her a present. She recalls: ‘Visiting Hanningtons was a treat, an occasion, and the place to purchase a special gift, especially at Christmas time, with Santa’s grotto being the ultimate festive experience. We went every year, and every year was better than the last… It took my breath away.’