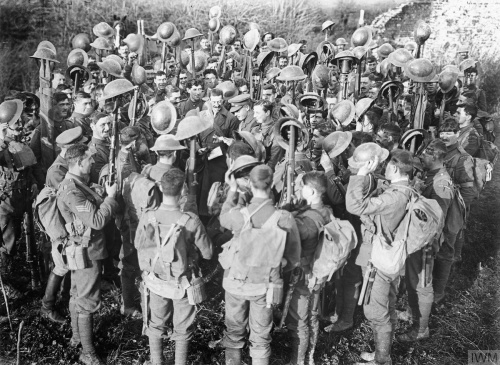 At 5 a.m. that morning Germany, exhausted, bereft of manpower and supplies and with hungry citizens at home, had signed a ceasefire agreement with the Allies.

Tragically though, in those intervening six hours, with peace within touching distance, more lives were lost. The last British soldier to be killed in action was Private George Edwin Ellison. He died at 9.30 a.m. while on patrol on the outskirts of Mons in Belgium - just a couple of miles away from where John Parr, the first British soldier to be killed in the conflict, had died in August 1914. They are buried in the same cemetery, opposite each other.

Like everything else about this war, negotiating the terms of peace was not easy and the ceasefire had to be extended three times. However, on the 28th June 1919, in the Hall of Mirrors at Versailles, Germany and the Allied Nations signed the Peace Treaty: The Great War, The Kaiser’s War, The First World War was finally over.

It had lasted nearly four and a quarter devastatingly long years and forever changed the world, not just Europe. It had been fought by two coalitions, the Central Powers consisting of Germany, Austria-Hungry, Turkey and Bulgaria; and the Allies whose key nations were France, Russia, Belgium, Britain and the USA. Although, at some stages during the conflict, no fewer than 24 countries were technically at war with Germany and her allies. And it is because we generally think of this conflict as being located in France and Belgium – images of the bloody, muddy Western Front – that there is an element of surprise in the knowledge that countries like Costa Rica, Cuba, Guatemala, Nicaragua and Honduras were also involved.

Sussex had, of course, played its part. The county’s proximity to war ‘over there’ meant involvement was inescapable. Locations around the south coast were identified as possible invasion spots and the Royal Sussex Regiment had assembled troops in Newhaven and Hastings to defend the ports. Thousands of men from the UK and Commonwealth had passed through training camps in Seaford before heading off to the Front. And vast numbers of these same men received care in the network of military hospitals set up to take advantage of the “recuperative powers” of the Sussex air. Everyone had resiliently endured, one general officer at GHQ in France feared that his wife, living in Sussex, suffered more from food privation than he did!

Away from the Home Front, Battalions of the Royal Sussex Regiment had been involved in the fighting from the start; they arrived in France in August 1914 and took part in almost every major offensive. The Regiment lost in excess of 6,800 men and the names of the battles in which they fought - Mons, Ypres, Loos, Somme, Passchendaele and Arras - have become etched in our individual and collective memories. This deep connection is perhaps explained by the fact that every Sussex family must have known someone who had been involved and their stories have come down through the century to us.

Stories like that of Edward Corringham “Mick” Mannock, born on the 24th May 1887 at Preston Barracks in Brighton (although, in truth, there is some question over his birth place). Mannock was one of the greatest fighter aces of the First World War, awarded more medals for courage than any other British fighter pilot - the Military Cross twice, the Distinguished Service Order three times, and posthumously the Victoria Cross. His last flight was on the 26th July 1918. After attacking a German plane he followed it down and was hit by ground fire. His left wing detached and he spiralled out of control. His body was never found.

Or the equally remarkable Captain Theodore Wright, who was born at 119 Lansdowne Crescent in Hove. As a member of the Royal Engineers, he was part of the British Expeditionary Force that arrived in Mons on the 22nd August 1914. The very next day he was sent to supervise the destruction of eight bridges over a canal. Whilst connecting leads under Jemappes Bridge he was hit. Despite serious shrapnel wounds, he continued to set the charges and successfully destroyed the bridge. For this act of gallantry, he was awarded the Victoria Cross. Less than one month later, Captain Wright was killed helping wounded men to shelter.

Commemorative stones have been laid at Brighton’s War Memorial for both Captain Wright and Major Mannock. Their experiences of war could not have been more different. Their stories of bravery and valour are exceptional, but their deaths, sadly, were not; inscriptions on war memorials around the country, around the world, demonstrate this. Take for instance the commemorative plaque under the beautiful WWI stained glass window at Brighton Unitarian Church, it includes five members of the congregation killed in action – men who may have shared the same beliefs, but were from very different backgrounds and walks of life. One was Arnold Forrester Dallaway whose family lived in Rose Hill Terrace, Brighton. Before the war, Arnold had been an engine cleaner working for the London, Brighton and South Coast Railway. He joined the army as a Gunner and was killed in action at The Somme on the 27th June 1916. He was just 22 years old.

We cannot begin to imagine what men like Arnold, Theodore and Mick went through or, using today’s sensibilities, judge what they did or how they did it. We can, just about, regard the 1914-1918 war as history, but it is, without doubt, an episode in our past that many still feel emotionally connected to. And this is important, because it means the thousands who lost their lives – whatever they were doing, wherever they came from - are not forgotten.