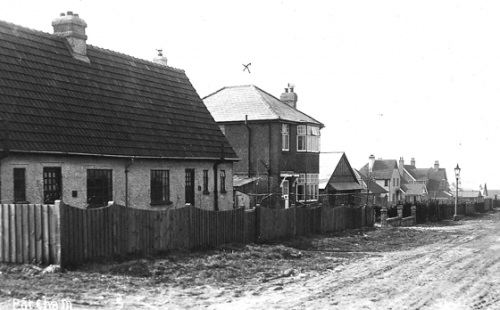 Sunday 13 February saw the planting of new elms in the centre of Patcham; the place where the old, twin elms had stood for so many years, but the idiom off with the old and on with the new doesn’t apply here. I am sure that I was not the only person to see the new trees in-situ and think of those that had been felled and reflect on all that had been played out in front of them over their long history. Happily though for me, I have had the good fortune to meet a lady willing to talk to me about her first-hand memories of Patcham and Preston Park stretching back to 1913.

Such memories can sometimes be obscured by time, but in talking to Mrs Muriel Elms I realised that, with her emphasis on personal experience set against the fabric of everyday life, she was giving me a real glimpse into the past. Much of Mrs Elms’ testimony comes from a talk she wrote and presented to local community groups, supported by a fine collection of photographs. Mrs Elms can no longer make this presentation, but she is happy for us to continuing sharing her lived experiences. This is social history with a human face:

“Memories I was born in 1913 in a house in Bates Road, Brighton. The house had three bedrooms, two living rooms, a kitchen and scullery. There were two toilets, one outside and one upstairs, but no bathroom. The garden was medium sized and we kept a few chickens.

In the kitchen was a range for cooking, the oven for baking being at the side and saucepans could be heated on the top. In the corner of the kitchen was a copper and the fire was lit, usually on Mondays to boil the water for washing the clothes, after boiling they were carried to the sink and rubbed on a wooden wash-board (later replaced by a glass one) - knuckles did get sore. After rinsing in the sink they were put through a mangle with wooden rollers – hard work turning. The washing was then put on the line in the garden to dry. This took all day and next day the ironing was done, with flat irons heated on the range. As there was no bathroom, we were bathed in front of the range fire in a metal bath using water from the copper which of course had to be lifted out in buckets – very laborious!

Although there were fireplaces in all the rooms the fires in the bedrooms were only lit in cases of illness. Downstairs in the winter a fire was lit every day in one room for one week and in the other room the next week thus keeping them aired.

On Sundays the muffin man used to walk around ringing his bell to sell his muffins and crumpets from the long tray he carried on his head. We also had a man selling winkles.

My grandparents lived in Redhill and on a Sunday my grandfather used to get up early and ride his bike down to us for breakfast and then he and my father went to the beach to buy fresh crabs and fish from the local fishermen who were selling from their boats on the beach. My grandfather would then bike all the way back.

After I passed the scholarship for the Grammar School I used to walk from Preston into the town or go by Tram, to the York Place School (which was in Richmond Buildings near the Level and backed onto the Phoenix Brewery. I shall never forget the smell of the brewery on a warm summer’s day). At the Tram terminus I used to watch the arm being changed from one line of wires to the other for the return journey. The School was moved into a new building in Balfour Road and called Varndean Grammar School in 1926.

In 1926 my father bought a plot of ground in Ladies Mile Road, Patcham from the Abergavenny Estate. It was called Drove Road on the original deeds, because cattle used to be driven up it and across the Downs to Lewes Market. We moved in in 1927 and had a lovely bathroom and hot and cold water in both kitchen and bathroom, what luxury! From the windows of our house we had a marvellous view of the Downs as there was farmland opposite. I was fifteen then and used to walk to school across the fields at the back of our house and through smallholdings, up a footpath (now Braybon Avenue) past the farm (Sinden’s) and over to Varndean. When I left school I had a job at the Public Library and Museum and I biked into Brighton. At weekends we used to enjoy walking over the Downs to Standean and talking to the cottagers.

In the 1930s the farmland opposite where we lived was sold for development and a Mr Ferguson built the Ladies Mile Estate and advertised houses at £499! In 1938 I was married in Patcham Church and we bought one of Mr Ferguson’s houses - with all mod cons.

In the war I was expecting my first child and we had to take in two evacuees from London. My husband was in a reserved occupation supplying meat to the Forces and worked all sorts of odd hours, as well as being in the Home Guard. We were no longer able to walk on the Downs as there were great rolls of barbed wire stopping any access. There was great excitement once when a German bomber was brought down on the way up to the Chattri.

By the time my daughter was eight years old we were able to wander again. In 1952 my daughter went to Varndean School, where I used to go, and by 1955 my son was at Varndean Boys where he later became head prefect and won a scholarship to Trinity College, Cambridge.” Mrs Muriel Elms 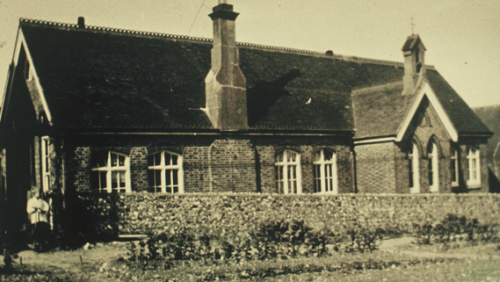 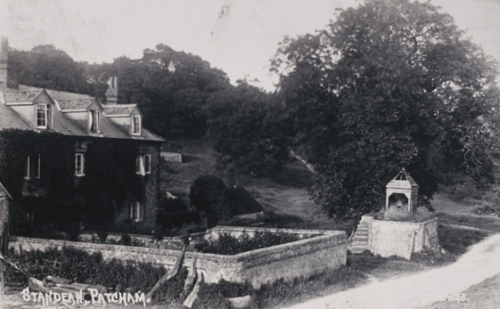 These photographs now form part of the Muriel Elms Collection and can be seen via the Preston and Old Patcham Society website, later to become the property of the Brighton and Hove Archaeological Society