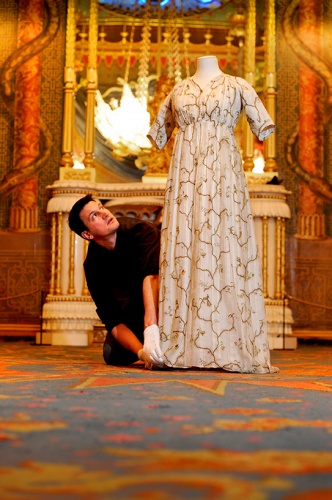 Many of us know of George IV’s passion for architecture and opulent furnishings, apparent by the lavish Royal Pavilion that still graces the heart of Brighton today. Perhaps though, less of us know about this King’s love of fashion?

Whilst George’s architectural influence stretched as far as Buckingham Palace and Windsor Castle, his influence on fashion was felt even further afield.

Indeed, George’s commitment to clothing made him a leading figure in fashion, and the popularity of English trends spread across Europe putting London at the forefront of men’s fashion – a position it still holds today. More than just an expensive indulgence, George was ensuring that England was the centre of attention.

A new exhibition at the Royal Pavilion called Dress for Excess celebrates the life of George IV as prince, regent and king, through the fashions of the late Georgian period.

The exhibition started on 5 February marking the 200th anniversary of the Regency Act which was passed in 1811. The act was brought about at a time when the current monarch King George III, ruler from 1760 to 1820, was suffering from an illness, possibly porphyria, which rendered him mentally unstable and unable to rule. The act enabled the powers of George III to be passed on to his eldest son, George Prince of Wales, the future King George IV.

In an attempt to establish himself as a great British monarch, George spent lavishly on the arts. Although heavily criticised during his lifetime, he left behind a rich cultural heritage and was arguably the greatest connoisseur ever to sit on the British throne. Dress for Excess provides an insight into the way these fashions from the late 18th and early 19th centuries have helped to influence the clothes we wear today.

The exhibition is only the second ever fashion exhibition to be held at the Royal Pavilion, and explores the stylistic influences on fashion throughout George’s reign. One such influence is military wear and a Hussars uniform worn by Private Robert Smith at the Battle of Waterloo in 1815 is included in the exhibition. Such was George’s high regard for fashion he ensured that his regiment was the most spectacularly dressed of all the British army with a single uniform costing more than eight times the annual wage of a working man.

Curator of Fashion and Textiles at the Royal Pavilion & Museums, Martin Pel says: “More than any other monarch, George knew the power of dress. Whether it was the dandy fashions of his youth or the military uniforms he wore as an adult, as he sought a role for himself while waiting nearly 60 years to be crowned king. His love of fashion was not merely an expensive indulgence, but a significant part in creating who George was.”

George was also a collector of paintings, adding large numbers to the Royal Collection, including various Dutch paintings from the 17th century and those previously sold by Oliver Cromwell. He admired and supported contemporary British artists such as George Stubbs, J M W Turner and Thomas Laurence.

One of the highlights of Dress for Excess is George IV’s spectacular coronation robe dating from 1821, a piece which has not been on view to the public for 30 years, and is on loan from Madame Tussauds. George’s flamboyant personality and love for all things extravagant meant the robe, at the time, cost £25,000 equivalent to £1.5million in today’s money. His coronation was the most expensive in English history, costing £238,000 with his robes being about 10% of this cost.

This and other period pieces are situated in the newly created exhibition space upstairs in the Royal Pavilion called The Prince Regent Gallery, a room which was once George’s bedroom.

Rather appropriately, a number of George’s more personal items of clothing stand in this space, amongst them are his decorative banyan, a form of elaborate house robe, and the enormous breeches he wore towards the end of his life when his excessive love of food had dramatically affected his waistline.

Brighton, comfortably distant from London, allowed George the indulgences he sought. He was to visit Brighton until the last years of his life when ill health, combined with the demands of kingship, led him to reside at Windsor Castle.