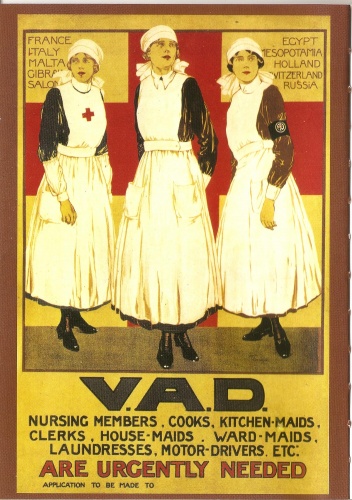 During the First World War (1914-18) more British women adopted uniforms than ever before. Apart from the standardised dress worn by nuns, nurses, domestic servants and members of the Salvation Army, adult females had scarcely been seen in uniform, but the proliferation of new war-related organisations created an unprecedented demand for outfits that would create identity, foster an esprit de corps and demonstrate their wearer’s role. Yet initially, when war erupted in August 1914, women struggled to gain the right to serve and to be seen doing their duty. Warfare was considered a masculine arena: genteel ladies were traditionally regarded as passive home-makers, while working women often held subservient positions, so in the early months of the conflict the expected role of females was, in general, not to undertake active work, but to support their men folk and urge them to sign up. Everything would change in 1915.

As all-female charitable organisations were formed such as the Women’s Legion and the Women’s Auxiliary Force, both established in 1915, their volunteers adopted quasi-military uniforms comprising a smart belted jacket, calf-length skirt, shirt and tie and cap. Otherwise women already in uniform were nurses and their appearance became more regulated, to identify members of the expanding branches of the wartime nursing services. In 1914 the British Army’s Queen Alexandra’s Imperial Military Nursing Service (QAIMNS), an elite corps of single women aged over 25 and of high social standing numbered under 300, but the admission criteria were soon relaxed with the urgent need for more recruits. The distinctive QAIMNS uniform comprised a grey dress, scarlet cape, starched white cap and collar, matrons wearing white-edged scarlet cuffs and nursing sisters scarlet cuffs. Over half of the trained nurses entering the British military nursing services joined the QAIMNS Reserve and wore a slightly different uniform: a grey dress of ‘washing’ material for ward wear, a grey cape with scarlet facings and white cap and cuffs. The other military nursing organisation was the Territorial Force Nursing Service (TFNS) originally formed in 1908. Following the outbreak of war many more members were recruited, some being posted overseas to staff military hospitals in theatres of war. These nurses wore blue-grey dresses, blue-grey capes with red facings and a silver letter ‘T’ in the corners, with white caps, collars and cuffs. In all military nursing units scarlet bands on the sleeves signified rank, but each organisation had its own unique service badge.

Besides British Army nurses, many WW1 nurses were volunteers trained by the British Red Cross Society or by St. John Ambulance, separate organisations who since 1909 had been establishing Voluntary Aid Detachments (VADs), teams of local volunteers to provide field nursing services. To become fully-proficient, girls had to train and pass exams in first aid and nursing. The term ‘VAD’ came to be used for the nurse herself, and by 1914 several thousand VAD volunteers were already trained, some classified as ‘mobile’ and able to serve with the military worldwide, while most registered to work only in their local Auxiliary War Hospitals. Recruitment of VADs was highly successful: nursing was growing popular, especially among ‘respectable’ girls wanting to ‘do their bit.’ Additionally, when the ‘General Service’ section of the VAD was launched in 1915, more roles became available, such as cooks, laundresses, clerks, typists and drivers. Within the hospital hierarchy, role and rank was distinguished by the colour of indoor uniforms, Commandants wearing a dark red dress, Red Cross nurses the iconic blue dress, while Order of St. John VAD nurses wore grey dresses with a St. John armband, all nurses’ uniforms completed with starched white cap, collars, cuffs and aprons.

Outside nursing, the official reluctance to employ women in war-related work began to dissipate in 1915. By then a visible civilian female presence was emerging in the form of uniformed transport workers, as women became trained as guards on London tube trains and as bus and tram conductors. Glasgow pioneered the moving of clerical staff from the office onto the streets by employing the first female tram conductors and this trend extended nationwide. Each city corporation devised a unique uniform for its female transport staff – tailored jackets or coats, hats and skirts, even knickerbockers, in designated colours. Despite considerable opposition from male colleagues, by the end of 1915 females numbered around half of Britain’s tram conductors, even becoming drivers in some cities. Women probably worked for Brighton Corporation Tramways during the war although it would be good to find visual or written evidence.

The expansion of the female workforce was also occurring in other significant areas. The ‘Shell Crisis’ or ‘Shell Scandal’ of May 1915 revealed the disorganised and inadequate state of British munitions manufacture, highlighting the pressing need for more manpower to keep pace with escalating production demands. A 30,000-strong ‘Women’s March through London’ in July demonstrated their potential and desire to aid the war effort and eventually a major reorganisation of industrial production and the entire workforce commenced. By late 1915 thousands of women were joining diverse industries including rubber moulding, manufacturing (of everything from shoes and soap to glucose and concrete), working in potteries and mills. The most crucial work centred on the munitions industry, many munitions factory workers or ‘munitionettes’ involved in manufacturing explosives, gun shells and small arms ammunition. For such heavy and dangerous work, girls were issued with rudimentary safety gear comprising wooden-soled clogs (or fabric slippers or rubber gumboots in particularly hazardous areas), a flame-retardant ‘National Shell Overall’ and a cap, the overalls soon superseded by practical tunics and trousers in some areas of heavy industry. Tragically, many hundreds of munitionettes died or were injured in factory explosions or became seriously ill through over-exposure to TNT, which turned the skin yellow, inspiring their nickname of ‘canaries’. Their working conditions were lethal, but they earned good wages compared with their pre-war occupations and gained the nation’s admiration.

A century ago, by late 1915, special work wear and uniforms were giving female war workers a degree of protection, a sense of camaraderie and conferred upon them the status that they wanted and deserved. 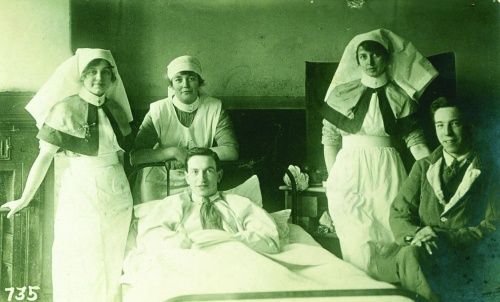 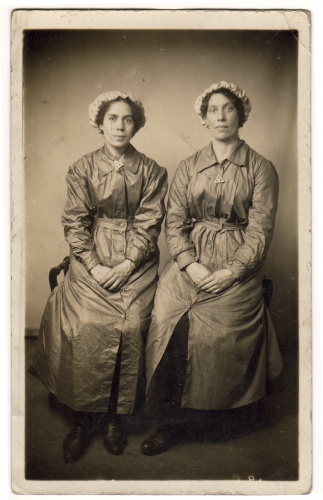