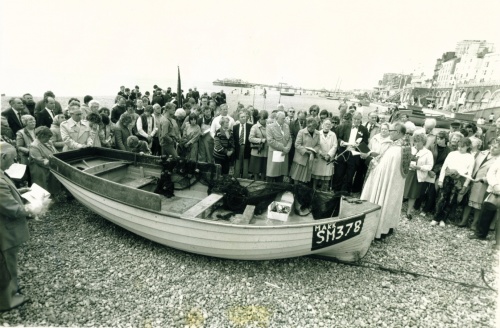 At 12.30 p.m. on Sunday 13th May a very peculiar Brighton tradition will take place outside the Brighton Fishing Museum – the annual Mackerel Fayre. This is when The Lord Mayor and other local dignitaries, all wearing their best regalia, come together with members of the Church - this year Father Robert Fayers, Parish Priest St Paul’s and St Michael’s - to bless the nets.

You can expect a family friendly service followed by live music and a big crowd of local people and visitors. What you will probably not find are lots of fishermen. This has become what Andy Durr, from Brighton Fishing Museum, calls a ‘heritage event’.

In the past, the Pre-Reformation Catholic Church in Brighton blessed the nets every year and for this benediction received a percentage of the mackerel catch when it was landed. This toll probably ended in around 1850, but the service went on intermittently until WWII.

In the mid-1970s the Fishermen’s Club, together with Richard Eckersley, Vicar of St Nicholas Church, rekindled interest in the practice and for a few years a blessing took place either on the beach or in the church, attended by many families involved in Brighton’s fishing industry. But by 1986 this had come to an end and it was not until 1996, when the Brighton Fishing Museum opened, that a version of the traditional blessing and the Mackerel Fayre once again became a regular, annual event. To-date, the biggest and best year was 1999 when the BBC’s programme Songs of Praise was recorded at the service; fishing boats large and small anchored off the beach and their crews came ashore to join the congregation. Fishmonger Carol Hayes, who read the lesson, remembers that day as “the ultimate achievement” for her and fellow organisers from the fishing community living and working in the town.

Fishing has always been an important part of the town and its economy. Brighton’s fishing fleet was one of the most important on the south coast during the 16th and 17th centuries. In 1580 there were 80 fishing boats, 400 mariners and 10,000 nets not to mention the fishing-related trades such as boatbuilding, sail, rope and net-making. In fact, the fisheries employed the greater part of the population; arable farming was limited, and sheep-farming, though profitable, did not employ many men.

When Kings Road was widened in 1864-5 the arches that we know today were built. They were originally used by the fishermen for storing and working on their gear, but also, in association with a church mission run by the Bethel Chapel and St Margaret’s Church, as a venue for meetings, social activities and a reading room, where no doubt abstinence and sobriety were encouraged - remembering, of course, that 19th century public opinion of fishermen was often based on the so-called ‘disreputable behaviour’ of some of its brethren.

William Humphrey, from a fishing family that can trace its association with Brighton fishery back to the 16th century, would have been one of those who presented in his dress, language and manner a marked contrast to other town’s people. And his story, indeed no fisherman’s tale, gives us an idea of the ups and downs of a fisherman’s life. William first owned a lugger called the ‘Smiling Morn’, but by 1920 she had become worn out and unseaworthy so, with money loaned from fish salesman Fred Gunn, he brought another boat. This was a big lugger with accommodation large enough to make travelling away for long periods possible, and William and his crew wasted no time in sailing to Folkestone. There they experienced the best herring fishing season they had ever had. William returned to the house he owned in Camelford Street two weeks before Christmas 1920 and went to ‘square-up’ with the fish salesman. To his total astonishment, he had enough money to pay back the loan plus all expenses incurred (Gunn had been paying William’s wife 1/6 a week during William’s six week absence) which meant he now owned the boat. This was an unheard of occurrence after just one fishing season. The downside was that after paying the crew William had nothing left at all for his family over Christmas.

The other pressing problem was that the boat needed urgent repairs. So William took out a second loan in order to get the work done in time for Spring mackerel fishing. On Boxing Day, William and his eldest son sailed to Shoreham, but on arriving found that they could not reach the shipyard because the tide was going out, so they left her moored up on the mud at Southwick. Next morning they returned and found that the boat had been damaged beyond all repair; her ‘back broken’ by old wreckage lying hidden in the mud.

This was a real setback for William, but undeterred he bought a new boat built in 1921; a smaller vessel with an engine, called the ‘Helping Hand’. Sadly, on the day it was launched the old horse that was helping pull her across the beach dropped down dead - not a good omen for a superstitious fisherman at the start of a new venture. But William sailed the ‘Helping Hand’, following the mackerel and herring around the coast, until 1936. He worked out of Rye and Newhaven throughout WWII onboard his smaller boat ‘The Estella’ and the fixed price of fish was so good that he was able to rent a cottage in Rye. William finished his working days helping other fishermen on Brighton beach. He died in 1959. His family continues to fish, run a fish shop and be part of Brighton’s fishing community today…you may see some of them at the Mackerel Fayre.

Footnote My thanks to Alan Hayes for his memories, stories and wonderful pictures and to Andy Durr from the Brighton Fishing Museum. 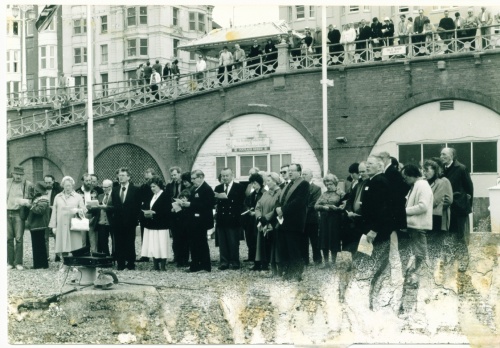 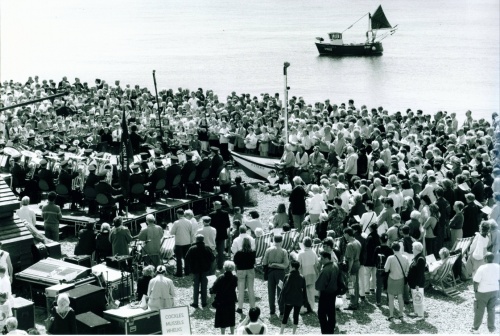 Reproduction courtesy of Alan Hayes. Recording of Songs of Praise, 1999. 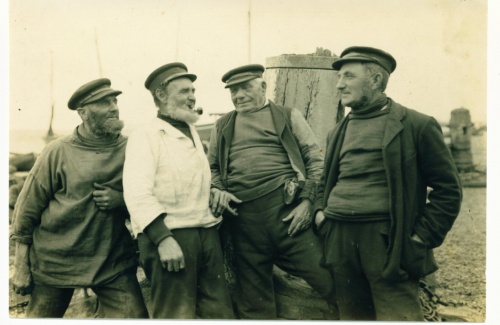 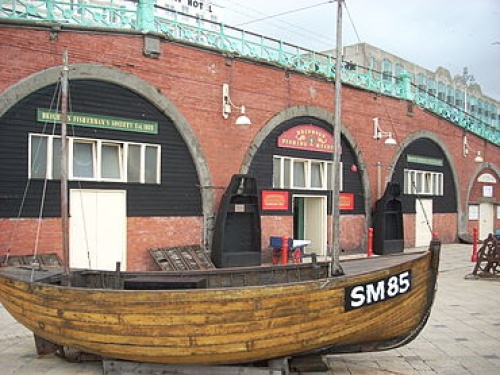 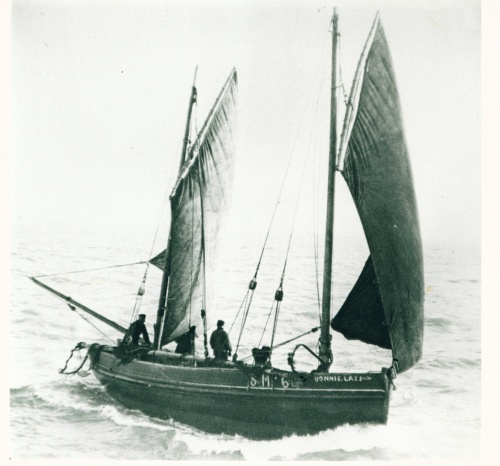