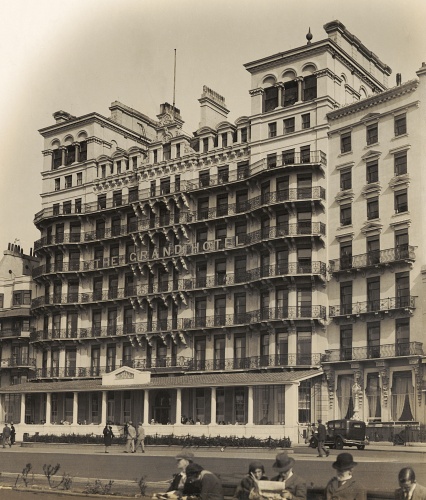 Gang warfare, racketeering, welshing and protection – no not the Sopranos, but the more seedy and sordid attractions of gangland Brighton in the inter-war years. A side of Brighton that was brought to us by Graham Greene in his 1938 novel Brighton Rock and later the film of the same name, staring Richard Attenborough as the sadistic teenage gangster, Pinkie Brown.

More than 50 years on, Greene’s story has been adapted again. This time the film has shifted to another fractious period in our history; a time when society was concerned with the clashes between mods and rockers taking place along the south coast. In October 2009, director Rowan Joffe had scooters race along the seafront once again, only this time in Eastbourne – although, through the magic of movie-making, many of us will probably swear it’s 1960s Brighton - in his interpretation of Greene’s gang conflict.

The 1947 picture was filmed almost entirely on location in and around Brighton and creates such a sense of realism and dread that The Daily Mirror declared: ‘No woman will want to see it. No parents will want their children to see it. The razor-slashing scenes are horrific.’ This protestation despite the disclaimer at the beginning of the film that assures viewers that the town it depicts is of the past, ‘another Brighton of dark alleyways and festering slums...crime and violence and gang warfare...now happily no more’. Greene himself stressed that the Brighton he depicted was passing into social history. He had, however, drawn inspiration for Brighton Rock from the genuine crime scene of 1930s Brighton.

There is no evidence of any organised criminality in the town or a real underclass of criminals, but there was an organised crime element at Brighton racecourse. The racecourse had a racket which deserved the name ‘protection’ in true Mafia or Costa Nostra style, led by the all-powerful Sabini gang. If a bookmaker wanted a pitch he had to pay the Sabinis. ‘They sold him the tissue on which he put the names of the runners, they sold him the chalk to write the odds and they had little bucket boys who brought sponges around to wipe off the odds.’ They engaged in loan sharking to people with bad gambling debts and looked after illegal bookies, providing clerks and ticktack men who doubled as bodyguards. They fought off rival gangs to keep control of this lucrative protection racket; so lucrative that the Sabinis could expect to make £4-5,000 per race meeting.

The gang’s trademark weapon was the barbershop razor and, if we need this fact corroborated, Richard Attenborough confirmed in an interview that John Boulting, the director of Brighton Rock, had arranged to have a real-life gangster on the film set. His job was to teach the actor to fight using a razor. Attenborough said: ‘His name was Carl [Ramon] I remember, and he had very thick plastered-down black hair, and he taught me how to slash a razor….. you can’t think of anything more horrific…’ (Kiss and Kill Film Visions of Brighton).

The gang’s leader was Charles Sabini, commonly known as Darby, a criminal of mixed Italian and English parentage. He was born in an area known as London’s Little Italy and during the 1930s was said to be a permanent resident in a penthouse apartment in Brighton’s Grand Hotel. His Clerkenwell-based organisation, which at times boasted 300 members including imported Sicilian gunmen in addition to local criminals, dominated the local underworld for nearly 20 years. Sabini was, without doubt, physically intimidating, but his real power rested on extensive police and political connections including judges, politicians and police officials. Police support was vital to him in his ongoing conflicts with rival gangs.

Ultimately though, it was this rivalry between gangs that led to Darby Sabinis downfall. Things started to go wrong in 1936 after a cut-throat attack on a member of a north London gang, the Whites, at Liverpool Street Station. On 8 June, 30 members of the Whites arrived at Lewes racecourse and took their revenge on bookmaker Arthur Solomons and his clerk. (This was the incident that provided the inspiration for the racecourse battle in Brighton Rock.) Then along came the East End gangster Jack ‘Spot’ Comer who challenged both the Whites and the Sabinis. Sabini’s power was further eroded by bankruptcy, following a failed libel action against a newspaper, and internment as an enemy alien, despite his mixed parentage, at the beginning of the Second World War. After the war, his empire was taken over by the White family led by Alf White and subsequently by the organisations of Billy Hill and Jack ‘Spot’. Sabini ended his days as a small-time bookmaker in Brighton and died in his home in Hove in 1951. He was immortalised as the gangster Colleoni in Greene’s Brighton Rock.