A History of Tennis Gear 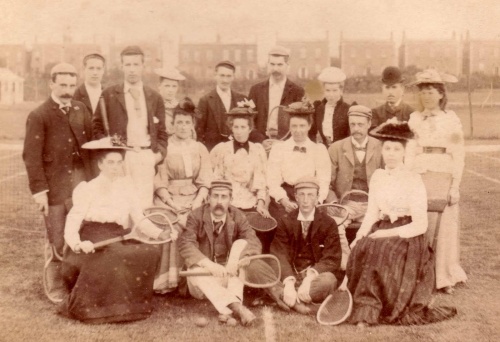 In 1875 lawn tennis was first included in the activities of Wimbledon’s All England Croquet Club (founded 1868) and in 1877 the club, re-named The All England Croquet and Lawn Tennis Club, instituted the first Lawn Tennis Championships. This celebrated annual event remains the greatest international tennis tournament and Wimbledon champions are undisputed style leaders on the courts. Here we look back at some of the cumbersome modes worn before the evolution of more modern tennis gear.

Early male tennis players enjoyed some freedom from the constraints of regular dress and favoured similar clothes to those already worn for sports like cricket. During the 1870s generally a loose white shirt was teamed with trousers or with knee-length knickerbockers and stockings, a lounge jacket typically worn at the start of a game, but often discarded during play. In the 1880s some players adopted striped sports shirts or crew-necked jerseys: by late-decade white flannel trousers were usual, worn with soft, rubber-soled canvas shoes. During the 1890s a plain or striped flannel blazer became fashionable, often accessorised with a round sportsman’s cap, the blazer pocket bearing the wearer’s club badge.

Unlike men, female players were mainly governed by fashion and in the later 1870s wore the figure-hugging ‘Princess’ gown incorporating a long, impractical train. Thick flannel, jersey and serge materials were customary for early tennis costumes, although when Maud Watson won the first Wimbledon Ladies’ championship in 1884, pale-coloured or white garments were already becoming popular, as they helped to mask the dreaded perspiration. Evidently pinafores with ball pockets were also a useful addition at this time. In 1885 The Field magazine recommended:

‘A costume of pale blue flannel with deep kilted skirt and long basque bodice, an embroidered apron with pocket to hold the balls..’

Fear of appearing ‘unladylike’ delayed any real progress in the development of functional female tennis dress during the Victorian age. Rather, fashion publications endorsed alluring, feminine costumes like the ensemble coquettishly described in 1894:

‘Tennis costume, two inches off the ground, of serge lined with check silk (glimpses of which would be revealed as she trips hither and thither) cut in one with the corselet which has narrow shoulder straps and laces down the back…check silk shirt..’

At the century’s close, Lottie Dod, Wimbledon champion during the late-1880s and 1890s, yearned for ‘a suitable attire for women’s tennis which does not impede breathing’.

By the Edwardian era, male tennis players usually wore white or cream flannel suits with shirts and ties. In 1908 the Tailor and Cutter advertised a ‘…flannel suit…made easy fitting at all parts and without lining… Trousers are…easy fitting and of full length as they will frequently have to stand cleaning, which is sure to shrink them… The vest [waistcoat] is an optional part of this suit.’

Women’ tennis dress continued to follow fashion, although the separate blouses and skirts worn in the early-1900s proved more comfortable than fitted Victorian gowns, while new wide skirt hemlines were worn several inches off the ground, making movement slightly easier. In 1905 American tennis player May Sutton shocked Wimbledon by rolling back her cuffs to reveal her elbows, her sleeves ‘too long and too hot’: this bold move helped to further the concept of freeing limbs from constricting garments.

‘Every year there is a discussion as to what is best to play in, but every year the question arrives at the same answer. The short, fairly full, white linen skirt is the best from all points of view, and the white silk shirt.’

These garments were underlined with one or more thick petticoats and knee-length knickers, substantial layers that ensured the light did not shine through, immodestly revealing the player’s silhouette.

Male tennis wear changed little between the early-1900s and the late-1920s, when dress in general finally grew more relaxed and a comfortable open-necked shirt replaced the formal collar and tie. By the early-1930s short-sleeved shirts were becoming acceptable and simultaneously an even more daring development occurred. In 1933 Bunny Austin was the first male tennis player to enter a major public competition wearing not trousers, but shorts. His lead soon followed by others, he was championed by the Men’s Dress Reform Party, who had already been advocating shorts for sports and leisure wear. For some years shorts and long trousers co-existed on the courts, but by the late-1930s shorts were the favoured option: in 1946 Yvon Petra was the last man to win the Wimbledon title wearing long trousers.

Women’s tennis wear was revolutionised when Frenchwoman Suzanne Lenglen played Wimbledon after WW1 wearing a flimsy, un-corseted, calf-length cotton frock with short sleeves, a length of silk chiffon worn as a headband. Tennis dresses rose to the knee in the late-1920s, by which time Californian Helen Wills Moody had also introduced the golf-style visor as a practical and stylish accessory. In 1931 Spanish player Lili de Alvarez shocked Wimbledon by wearing a divided skirt resembling culottes, created by fashion designer Elsa Schiaparelli – the introduction of female ‘shorts.’ During the early-1930s a debate raged over culottes but by the end of the decade tailored women’s shorts and short-sleeved shirts were an acceptable alternative to pleated skirts and dresses. Gertrude Moran (‘Georgeous Gussie’) caused the last major sensation in 1949 when she wore an extraordinarily short white Ted Tinling-designed dress that revealed glimpses of lace-trimmed knickers. Past Wimbledon players braved publicity and boldly championed game-enhancing dress innovations that extended beyond the realms of tennis, pioneering some of the comfortable, relaxed clothes that we take for granted today. 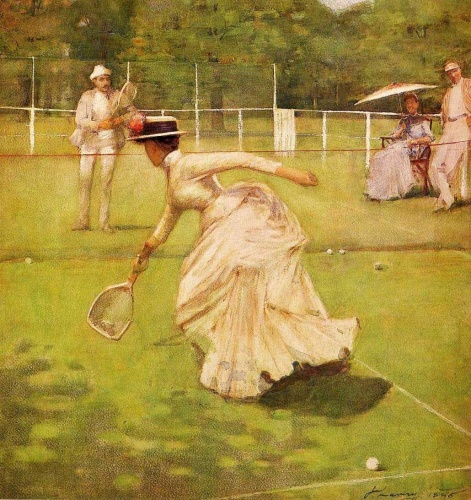 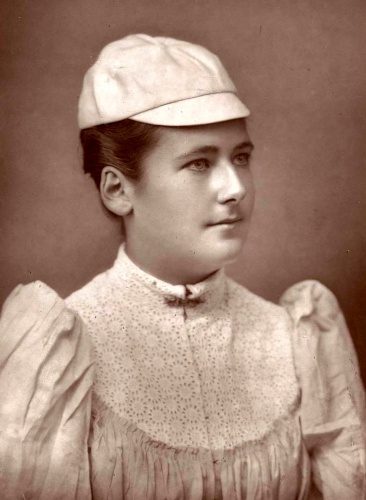 This photograph, 1891, shows Wimbledon champion Lottie Dod, in her fashionable white blouse and sporting cap: she longed for looser tennis clothes that did not hamper breathing [Wikimedia Commons] 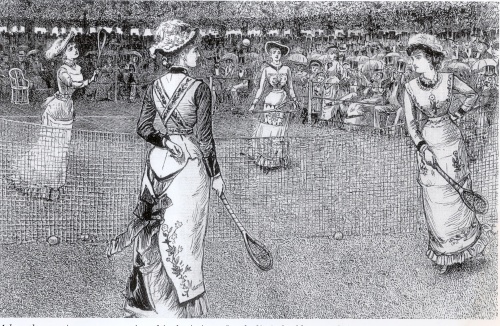 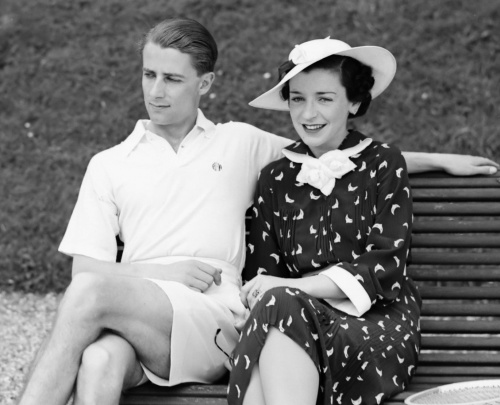 Men’s tennis gear was modernised during the 1930s when Bunny Austin, pictured here with his wife in 1936, promoted shorts over long trousers [Wikimedia Commons]