The London to Brighton Bike Ride 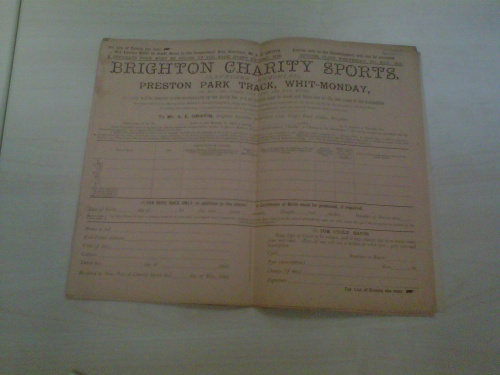 Velocipede (Latin for “fast foot”) is a collective term for any of the various early forms of human-powered land vehicle, like the unicycle, the tricycle and the quadracycle. The most common type of velocipede was, and still is, the bicycle. Something that we are all very familiar with in Brighton, or ‘Cycling Town’ as it is known to some – the place where the Council have multi-million pound plans to create a European centre of excellence for cycling.

The already significant number of people cycling in the City will be increased by thousands on the 15th June, when The London to Brighton Bike Ride hits town. But why Brighton? Of course, there are lots of reasons why cycling rallies choose to come to Brighton, but key amongst these must be our historic connection with the development of the velocipede and cycling as a popular pastime, sport and something of a national obsession.

Tracing the origins of the bicycle is not that easy, you could say it goes back as far as Leonardo da Vinci. It certainly involved an international group of inventors, designers and manufacturers and, along the way, Brighton became home to some of the best-known cycle and cycling pioneers. Harry Lawson, for example, who famously (in cycling circles!) invented the rear chain driven Safety Bicycle in 1879. Lawson started in the cycle trade manufacturing Penny Farthings in premises on Preston Road. Unfortunately though, as a consequence of having rather short legs, he was unable to ride them himself so, determined to be a cyclist, he set about designing a bike that could be driven by hand and foot levers. He had this machine made at the Regent Iron Works in North Street (where the Royal Mail sorting office is today). Other local celebrities were Richard Green of Bond Street and James H Harrison who became a respected authority on all cycle matters. In 1862 Harrison opened a business at 14 Queen’s Road selling velocipedes and was the first to introduce the “Boneshaker” to Brighton. He gave demonstrations of what many, initially, considered was little more than acrobatics and wowed the crowds with his skilful balancing. He also set up academies where thousands of people were taught how to ride these ‘new contraptions’. The majority had their experience restricted to riding within the indoor schools – ‘working people’ in the old dormitories of the Royal Pavilion, but an advertisement in the Brighton Gazette (12th May 1870) promised wealthier aspirants “The use of the bicycle taught in three hours; terms 1/- per hour, the Grand Concert Hall, West Street and Prince’s Place, opposite the Chapel Royal, open daily 10 a.m. to 10 p.m. The best stud in Brighton.”

Harrison started the Brighton Bicycle Club in 1873, the earliest cycling club along the South Coast. The cost of equipment meant that it was quite an exclusive club and in 1878 it only had 20 members. But by the 1890s, largely due to the invention of the pneumatic tyre, cycling had turned into a craze which was fashionable across the class and gender divide. At the start it only attracted the most intrepid women, but by the end of the century it had become a symbol of emancipation.

Among the first to be initiated in Brighton were a Mr W Clarke, Mr Allen Hastings and Mr C D Buckwell who, reputedly, cycled on every machine invented from 1869 onwards and rode nearly 100,000 miles in his lifetime. Cycling distances quickly caught on – J Mayall, Junior, was the first person recorded as having ridden from London to Brighton on 17th February 1869. In 1870 the quickest time known for this journey was accomplished by Mr T Moon, Junior, described by the Brighton Gazette as ‘an expert bicyclist’, in 5 hours and 40 minutes. A few days later the Brighton Daily News, (5th October 1870) reported “the most extraordinary feat” undertaken by the same T Moon, son of the landlord of the Union Inn, and Mr Fry of Brighton Fire Brigade, who cycled the return trip, 104 miles, in 15 hours. Granted they encountered fog on the way up, but this seems to have been a leisurely trip starting at 4.55 a.m. and stopping for breakfast in Crawley and a lengthy lunch at the Elephant and Castle Inn then, on the return journey, breaking for tea and arriving home at 10.40 p.m.

With more of an eye on the clock was a gentleman from Paris who came over especially to make the run. Mr Jackson rode a tricycle and was accompanied by his 14 year old son and a Mr Flower riding a velocipede “of the Phantom pattern”. They left Westminster Bridge Road, London and arrived at the Albion Hotel, Brighton in 7 hours 30 minutes. Questioned about the time taken, Mr Jackson rather despondently said that if his son had not been with them they would have gone a lot quicker! (Brighton Gazette, 22 September 1870.)

The list of people who cycled from London to Brighton in the early, pioneering days is remarkably long, bearing in mind how dangerous and excruciatingly painful the journey must have been, but this was just the start for Brighton as a cycling venue. Since 1976, when there were 34 entrants, what we have really become known for is The London to Brighton Bike Ride (L2B). In 1983 this rally had grown to 11,000, riding all manner of velocipedes including unicycles, penny farthings, rickshaws and tandems. “Theatre groups and brass bands entertained the cyclist on route and a bicycle boogie took place at the Royal Albion Hotel.” (Brighton Argus). This year, 28,500 cyclists have registered to take part and it is hoped that £3.3 million will be raised for the British Heart Foundation. It is Europe’s biggest fund raising cycle ride, and perhaps it’s most popular.