The Most Notorious Man-Women Story of the Early 20th Century

I went on an organised walking tour recently of some of Brighton’s more interesting places. Outside The Old Courtroom in Church Street the tour guide regaled us with a fascinating tale that he introduced as similar in theme to the stories surrounding Phoebe Hessel - one of the most well known women of Brighton – who is said to have dressed as a soldier and served in the West Indies in order to be near her lover, Samuel Golding.

That Phoebe travelled with Samuel when he was in the Army is probably true, but that she dressed as a man to fight alongside him, her gender undiscovered, may be a story she made up in old age to entertain visitors on Marine Parade. This new “impostor” story, however, has a definite ring of truth, not least because the newspapers of the day said it was so! Brighton and the Man-Woman hit the headlines in March 1929, becoming one of the most scandalous news stories of the decade.

Rose Collis in Colonel Barker’s Monstrous Regiment and the Brighton Ourstory Project: A History of Lesbian and Gay Brighton both recount, perhaps more accurately than the newspapers and my tour guide would admit, the story of Lillias Irma Valerie Barker who masqueraded as Colonel Sir Victor Barker.

Lillias (known as Valerie) was born in Jersey in 1895, living there until the family moved to Surrey in 1899. At the outbreak of war she joined the VAD (Voluntary Aid Detachment) and in 1918 married Harold Arkell-Smith, an Australian Officer 16 years her senior. The marriage lasted six weeks; dreams of a ranch and a life in the Australian Outback were soon dispelled by the growing sense of revulsion she felt towards him. So she left and re-enlisted in the newly formed WRAF. After being demobbed she met Ernest Pearce-Crouch, also from Australia and they had two children.

The couple went into farming together in Climping, Sussex and it was here that Valerie started to pursue an interest in both masculine clothing and a friendship with Miss Elfrida Haward. This, combined with Ernest’s excessive drinking and laziness, ultimately led Valerie to, once again, leave home.

Kitted out with a full gentleman’s wardrobe she moved into Brighton’s Grand Hotel as Sir Victor Barker, DSO. The next day Victor was joined by his fiancée, Elfrida Haward. They were married at St Peter’s Church in Brighton on the 14th of November 1923.

The wedding over, Victor and his wife settled down to married life together in the Grand, but the lifestyle of a gentleman of leisure was expensive and some employment, befitting a decorated officer of the Great War, was required. Victor, now masquerading as baronet, Captain Sir Victor Barker Bart, opened an antiques shop and here began a whole series of career and identity changes, along the way loosing a very disillusioned Elfrida.

One career path led Victor to become the live-in secretary to Colonel Henry Rippon Seymour, a leading figure in the right-wing National Fascisti. During this brief flirtation with fascism, Victor taught fencing and boxing to teenage recruits: “I used to go out with the boys to Hyde Park,” he recalled, “and we had many rows with the Reds.”

A serious downside to the character of an officer and a gentleman, a man-about-town, knowledgeable raconteur and good “chap”, was that it was expensive to maintain and in 1929 Leslie Ivor Gauntless Bligh Barker was arrested on bankruptcy charges. Once in Brixton prison the truth about his gender was soon uncovered and by the time the transfer to Holloway took place the truth had begun to unravel. The press were frantic to expose the full story and the public demanded an official statement; was the prisoner to be charged with bankruptcy, impersonating an officer or perjury? In the end, the judge at the Old Bailey found Valerie guilty of “knowingly and wilfully causing a false statement to be entered into a register of marriage.” The false statement being that Sir Victor Barker was a bachelor and that there was no lawful impediment as to why he and Miss Elfrida Haward should not be man and wife. The sentenced passed was nine months imprisonment.

After being released Valerie moved to Henfield where she once again assumed life as a man, but things were never the same. As John Hill, she was forced to take on low paid, menial work and in 1934 even served a prison sentence for theft. As a means of making money, she sold her story to the press and, masquerading as Colonel Barker once again, joined a sideshow on Blackpool seafront, as The Man-Woman.

In 1960 Valerie died, poor and forgotten, living as Geoffrey Norton. She is buried, at her own request, in an unmarked grave in Kessingland churchyard near Lowestoft. 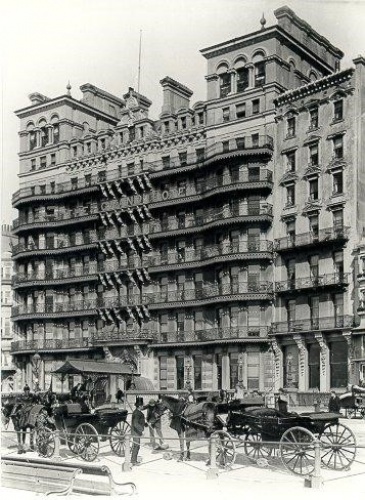