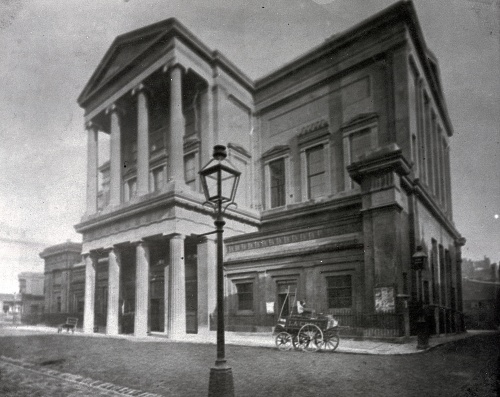 If your New Year’s resolution was to get out more and do different things then I may have just the thing for you. The Old Police Cells Museum in Brighton’s Town Hall. This is a fascinating place, originally dedicated to charting the history of policing in the city from the first days of the force in 1812 until 1967 when the local force merged with the Sussex Police. It has now been expanded to cover policing in Sussex up to the present day. The museum is staffed by volunteer workers all with a great deal of knowledge and all with a tale to tell.

The police station opened within the Town Hall in 1830 and during its long period of service saw many interesting times including, of course, the era of the Mods and Rockers. Graffiti on the cell walls gives us a window into many events, but nothing quite as dramatic as the story of the murder of the station’s own Chief Constable.

Henry Solomon was originally a watchmaker, but had worked for the town’s Commissioners since 1821. In 1832, he was made Joint Chief Officer of Police and in 1836, when his partner William Philbeam resigned, Solomon was given sole responsibility as Chief Constable. At the time, there were only 31 members of the constabulary so Solomon, through necessity, was involved in day-to-day policing and the running of the station. This is how such a senior police figure came face to face with minor gang member and petty criminal, John Lawrence.

Lawrence was 23 years old, originally from Tonbridge, living in Cavendish Street, supported by a prostitute known as ’Hastings Bet’. On the evening of 13th March 1844, Lawrence and another man were seen taking a roll of carpet from a draper’s shop in St James’s Street. A shop assistant followed and apprehended Lawrence, but his accomplice got away. Back at the shop, the owner handed the thief over to the police. From there Lawrence was taken to the police station where Solomon, sitting in the sergeant’s office in the sub-basement, started to interview him. Apparently, because Lawrence was distressed the decision was made to sit him down near the fire. Three other officials were in the room, but failed to keep a careful watch so that when Solomon passed by Lawrence’s chair the thief had the opportunity to grab the iron poker from the fireplace and strike a blow on Solomon’s uncovered head. It was at that moment, the Brighton Guardian proclaimed, he received “his death blow”.

Two attending surgeons found that Solomon had received a desperate blow on the right side of his head. He was carried to his home in Princes Street and shortly after 10 a.m. the following morning he died.

An inquest was held the next day and immediately after Lawrence was conveyed to the county goal at Lewes. One week later, he went before the Lewes Assize Court. As there were three eyewitnesses to the murder and no witnesses for the defence the trial only lasted three hours. Counsel for the defence could do no more than allege that the crime was committed in a momentary fit of insanity. The jury did not retire and only took twelve minutes to arrive at a guilty verdict. Lawrence was taken from Lewes to Horsham gaol, where he was publicly hanged. He was the last person to be hanged in Horsham.

The outstanding features of this story are firstly the ferocity of the attack - such that it bent the poker; secondly the lack of motive and, finally, the way the plight of Solomon’s widow and her seven surviving children touched the hearts of so many people.

A public appeal was made and contributions were received not only from members of the public but also from the Government who subscribed £30; Queen Victoria £30; the Jewish congregation fifty guineas; and a circus contributed the proceeds of one night’s performance. The total sum received was £1,030.14s, which made possible a pension of £2 a week for Solomon’s widow. A vital lifeline for her in the days before police pensions.

50 year old Henry Solomon was buried in the Jewish Cemetery in Florence Place, off Ditchling Road. Unfortunately, the grave is now in a poor state, party due to a family of foxes who have made it their home. Councillor Pat Drake, who was instrumental in setting up the museum, did mention that plans are afoot to raise fund to carry out restoration work and I am sure if you visit the museum you will be able to find out more about this.

Opening days this winter are 19 January, 16 February, 15 March and 12 April then the official open season starts to coincide with the Brighton Festival in May. To book your place on a guided tour, please telephone, in advance, Brighton Town Hall Reception on 01273 291052. No charge is made for entrance, but a donation towards the upkeep of the museum is always gratefully received.