The Night of the Fires 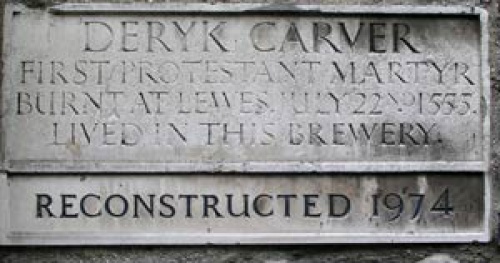 Protestant Deryk Carver ran the Black Lion brewery in Black Lion Street. He was arrested in Brighton in 1554, a victim of Queen Mary’s determination to re-catholicise England. He was stood in a barrel of pitch and burned alive for refusing to recant his faith.

Whether you are lighting sparklers in your back garden or watching £12,000 worth of fireworks being let off at the Sussex County Cricket Ground you will be doing so in compliance with an Act of Parliament passed in 1606, ‘for a publique thanksgiving to almightie God everie yeere on the fifte day of November’.

The Act was drawn up in the midst of the anti-Catholic hysteria that swept the country after the discovery of the Gunpowder Plot and proclaimed that the deliverance of James I, from a messy end at the hands of the Papist conspirators, be ‘held in a perpetual remembrance’. The Protestant government may have imagined this ‘remembrance’ taking the form of bell ringing and church services, rather than bonfires and rockets, but we have never forgotten poor old Guy Fawkes, gunpowder, treason or plot.

And in the 400 or so years that we have been celebrating the 5th November, the 1800s stand out as a time when the young people of Brighton made the most of the evening’s licence and indulged in some real mayhem and madness.

Unsurprisingly, this exuberance was not always appreciated by the powers-that-be. Ever fearful of mob violence, a public notice was issued on the 4th November 1817 warning against ‘celebrating the anniversary of the Gunpowder Plot by means of fireworks’. But on the 5th a party of boys (or the mob depending on your view) decided to ignore the edict and gathered on the Old Steine carrying fireworks. Sixteen Peace Officers, led by the High Constable John Williams, attempted to take the offenders into custody. Then at 9pm a lighted tar barrel appeared. This was, after fierce resistance, captured and extinguished by the patrol, but the mob was enflamed. Looking for something to take their frustration out on they moved to Castle Square and attacked the High Constable’s house.

Fearing for his property, Williams sent to the Infantry Barracks in Church Street for help and the Riot Act was read. Troops advanced on the Steine with bayonets fixed. In the dark and ensuing skirmish Peace Officer, John Rowles was stabbed by a soldier. He died the next day. At the inquest, Williams was found guilty of ‘wilful murder’. This extraordinary verdict a direct result of the jury being influenced by an article published in the Brighton Herald on the 8th November – mid-hearing – which provocatively claimed that the High Constable’s rash action had been unjustified and that he was to blame for the death of an innocent man. The Coroner was stumped. All he could do was admonish Mr Teake, the publisher of the newspaper, for allowing prejudicial comments to be printed pending the completion of criminal proceedings, and send Williams to Horsham Assizes.

The Assizes took another view, they believed Williams had shown prudence and found him not guilty. This ‘prudence’ was not, however, repeated. Regardless of how rowdy the 5th November festivities became, the infantry was never called in again. And left to their own devices the ‘bonfire boys’ did not hold back; in 1825 ‘the firing of guns and pistols and the explosion of rockets mingled with the shouts of the mob… Not satisfied with the Steine …they twirled the flaming tar barrel into North Street…A police officer was knocked down and the cask rolled over him, covering him with fire and dirt, the mob continuing their amusement as they trampled him in the mud…’ (Brighton Gazette).

Fear of these ‘roughs causing mischief’ meant that future celebrations were confined to The Level and this was fine until 1858, when a group broke away and made for London Road. The police tried to stop them and in the fighting seven officers were seriously injured. The authorities did eventually manage to seize the ringleader, George Kent, but were forced to shelter in a pub in Trafalgar Street, while a mob of 1,000 pelted them with stones.

By 1875 the Brighton Borough Bonfire Society had organised proceedings. Banners were carried in procession around The Level; effigies of Guy Fawkes, Pope Pius IX and magistrate Rev Moore (who earned his place on the pyre for imprisoning, with hard labour, a little girl accused of picking geraniums from the garden of a Spalding almshouse) were burned; and around 15,000 people, dressed up in all manner of costumes, spent the evening watching rockets, squibs and fire crackers. In 1876 effigies manufactured by Madame Tussaud’s were stuffed with fireworks and included one of the ‘Blackburn Murderer’ (a barber who was caught because he carelessly left men’s whiskers on his victim’s body). A procession of 20,000 started at the Brunswick Arms (now the Caroline of Brunswick) and marched around The Level with banners declaring “No Popery” and “God Save the Queen”. The next day the Brighton Herald enthusiastically reported that Brighton had quite outdone the Lewes Bonfire Boys on this occasion.

But unlike Lewes, the tradition of bonfire societies in Brighton had died out by the turn of the 20th century. This does not, however, mean that celebrations stopped; since 1952 Brighton Lions Club has staged large fireworks displays. In the beginning they were more-or-less private events put on for disadvantaged children, now they are huge affairs held at Sussex County Cricket Club. Misrule might have given way to ‘health & safety rule’, but we do still like to Remember, Remember the Fifth of November, Gunpowder, Treason and Plot. We see no Reason Why Gunpowder Treason Should ever be Forgot. 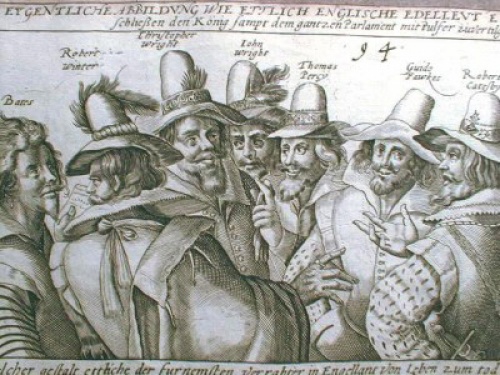 “The Great Conspiracy” a contemporary Dutch engraving of Guy Fawkes and his fellow conspirators. The gunpowder plot aimed to blow up Parliament, the King, and the House of Lords and return Catholicism to Britain. 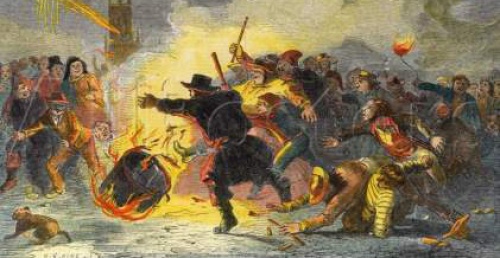 The Battle of Tar Tub 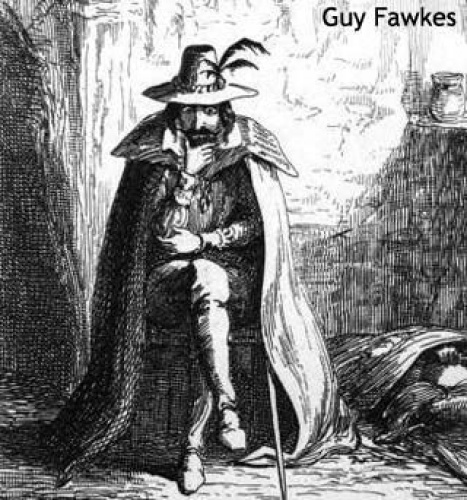 Although he was hanged in many places Guy Fawkes is annually burned in effigy. A particularly large one, burnt in London in the reign of Charles II, was stuffed with live cats so that the ‘Guy’ could squeal realistically when he was consigned to the flames.