Oldland Windmill - A story of survival and restoration 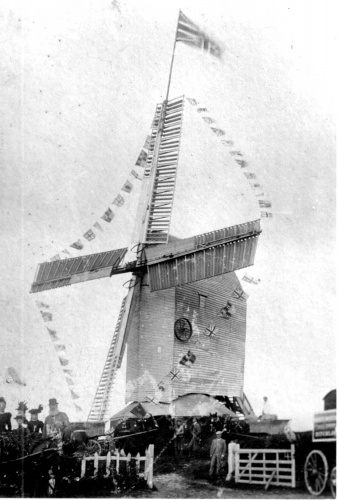 Most readers will be familiar with Jack and Jill, the pair of windmills sitting atop the Downs at Clayton. But next time you visit Jill, the white post mill, look out across the weald and you’ll spot little more than a mile to the north another post mill perched on the first greensand ridge. This is Oldland Windmill.

Oldland Mill first appears on the Oldland Estate map of 1703 and was probably constructed to replace a mill to the north of Ditchling which “fell down” in 1684. Oldland was constructed by the Turner Family to provide flour for the local villages of Ditchling and Keymer, both being mentioned in the Doomsday Book. (Hassocks did not exist as it only burst onto the scene with the arrival of the London to Brighton railway line in the 1840s.) Oldland was worked commercially by a succession of tenant millers, many of whom carved their name in the main post. The earliest photograph (fig 1) shows the mill bedecked in bunting marking Queen Victoria’s Golden Jubilee Celebration in 1887. In those days it was quite common for windmills to be decorated to celebrate both local and national events.

By the late 19th century, the industrial revolution had led to steam engines being available as a source of power and the fate of windmills in general was sealed. Oldland embraced this new technology by adding an external engine drive in about 1880 and the large pulley on the side of the mill to receive a leather drive belt from an engine can be clearly seen in figure 1. (It’s interesting to speculate why the drive belt had been removed and the engine drawn back out of sight when the picture was taken!) However, even this major enhancement could only delay the inevitable, and Oldland finally succumbed being abandoned in 1912. But a commercial life of over 200 years is hardly to be sneezed at!

Being situated at the intersection of three ancient trackways and nowhere near any metalled roads, Oldland Windmill sat forlorn slowly rotting and rusting, the only visitors being passing walkers who occasionally ventured up to the decaying structure. However, this isolation undoubtedly saved Oldland from destruction as she was not stripped of her timbers, vandalised or set alight – the fate of many windmills early in the 20th Century.

In 1927 the mill was conveyed to the Sussex Archaeological Society by the Turner Family. The Society worked to prevent further deterioration and mounted a “display of agricultural implements” in the Round House, the large building housing the massive trestle which supports the main post which gives this type of mill its name. Oldland’s round house is actually octagonal – an unusual and rather attractive feature. In 1934, the idea of restoration was first suggested, and a ‘Shilling Fund’ was launched with a target of £150 to cover the estimated cost of repairs. Sadly only £12 was raised and the attempt abandoned. This was much regretted in an article in the Sussex County Magazine where it was noted that “Oldland Mill is down and done for…” suggesting that it was now beyond repair (fig 2). However, this prompted the Archaeological Society to carry out some “urgent repairs” to the structure in 1935, primarily to prevent total collapse.

Frank Brangwyn, the Ditchling Artist, loved Oldland and the spectacular views it offered to the south along the Downs. In 1951, he launched a second appeal for funds, the estimated cost having risen to £500. But this second attempt was also abandoned after only a year of modest contributions. The future looked bleak once again. This was not helped by a survey in 1976 which found the structure to be “unsafe”, an estimate to restore the mill to “a workable condition” being given as £2,000 (fig 3). This alarming news prompted the Hassocks Amenity Association (HAA) and the Hassocks Field Society to begin to explore the possibility of restoration once again.

The HAA seized the nettle in 1980, obtained a short lease and started serious restoration, a figure of £7,000 being the updated cost estimate. A team of local volunteers was formed by Keymer residents John and Iris Annett. The Bourne sisters of Ditchling joined and together with the Annetts they conceived and ran a major exhibition in Ditchling over a weekend in August 1980 which raised about £1,700 – a remarkable amount at the time – enabling a more thorough Engineers Report to be commissioned. This revised the estimate to £25,000, and that was assuming that all the work was carried out by volunteers! The challenge was now set.

A team of local volunteers was established in 1980 and work progressed steadily through the 80s and 90s, but by 1996 progress was slowing, some volunteers had drifted away and the spiralling cost of materials led the Mill Committee to meet to consider abandoning the project! John Annett – still leading the project – was passionate about continuing and won the day following a heated debate.

In 1997, the HAA obtained the freehold of the mill and Oldland Mill Trust (OMT) was established as a separate registered charity linked to the HAA. By 2004, it had become clear that substantial funds would still be required to complete the restoration (fig 4) so available grants were explored. Eventually, a Rural Enterprise Scheme grant for £62,500 was awarded by DEFRA to replace the sweeps, construct a new brake wheel and reinforce the main structure – all essential to ensure that the mill would work again (fig 5). This grant, together with more modest but regular grants from the Turner-Dumbrell Foundation, spurred on the team of volunteers to accelerate progress so that by October 2007, new sweeps were hung and the wind turned the wind shaft, transmitting drive through the whole structure once more. In October 2008, stone ground flour was produced for the first time in nearly 100 years. Oldland was back in business (fig 6)!

Progress since then has continued unabated with commissioning of the grain and flour handling equipment, improving safety measures to encourage public access and, critically, learning how to run the mill efficiently, with a sub-set of the volunteers forming the ‘Milling Team’.

More than 100,000 man-hours of volunteer time, over 20 tonnes of green oak and over £100,000 of donations and grants all spread over approaching 40 years have together enabled the third restoration attempt to succeed. Oldland once again produces stone ground flour (fig 7) and can claim to be the oldest regularly working windmill in Sussex. And there is no reason why she shouldn’t continue to work for another 300 years……

The mill has won many awards for the quality of the restoration, the most prestigious being the English Heritage ‘2014 Angels Award’ for the most popular restoration project in England completed entirely by volunteers. Details of the annual programme of open days, group visits and presentations may be found on the website: www.oldlandwindmill.co.uk .

Why not visit Oldland Windmill in 2019 to see just what could be achieved by the early engineers using elegant simplicity over three centuries ago?