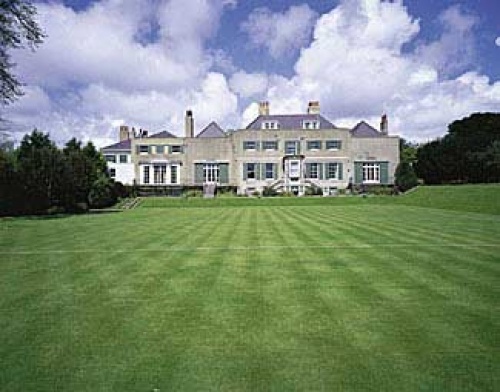 What is the attraction of Preston Manor? As a resident of Preston, I pass the house almost daily, but I really do not know what I feel about it. On sunny days and especially when the front lawn is covered with daffodils, I think it looks charming and I remind myself that I must visit its rooms again soon; but on grey days it almost disappears into the background, its architectural and family history lost from view. David Beevers, one time Keeper of the Manor, certainly does not share my pedestrian views; in an article in The Lady magazine in 1997 he explained exactly why I should be more interested and appreciative of this great building:-

This house is unique. I know of no other typical Edwardian house open to the public in the whole of England. There are other houses of approximately this age, perhaps, but no other that exemplifies the typical taste of a gentry family at the turn of the century. Preston Manor is neither a stately home nor a modest villa - it somehow falls in between the two. At one time there were many similar houses, but they were eventually demolished because they became too big and uneconomic to run (‘Preston Manor: an Edwardian time capsule’, The Lady 16-29 December 1997, 78-79).

Doing a little research I found that Preston Manor could easily have suffered the same fate or been turned into a casino or girls school if its owners, Sir Charles and Lady Ellen Thomas-Stanford, had allowed it to fall into the hands of Lady Ellen’s son, John Benett-Stanford. Instead, they bequeathed the house to Brighton Borough Council upon their deaths in 1932 (Sir Charles in March and Lady Ellen’s in November).

Since then this rare survivor has been deemed a kind of Edwardian time capsule, still looking much as it must have done in 1905 after the family made substantial additions and alternations. They commissioned Charles Stanley Peach to demolish the tower that had been erected in 1880, construct new wings for both servants and visitors, widen the entrance hall and build additional attic rooms. Central to this renovation programme was, however, the design of a Regency style verandah on the north-west front, which totally changed the character of the house.

So what was it like before? The name ‘Preston’, from the Anglo-Saxon ‘Preste-ton’, meaning ‘a priest’s farmstead’, suggests that a settlement was here long before the Norman Conquests. When the Doomsday Book was compiled in 1086, the property was one of eight manors belonging to the Bishopric of Chichester. It comprised most of the parish of Preston, many acres of what is now Hove, some two hundred acres of the parish of Bolney and minor acreage elsewhere. In 1510, the Bishop leased the Manor of Preston to Edward Elrington. The Elringtons and their relatives the Shirleys inhabited the property as leaseholders, first from the Bishop and then from the Crown, until 1628, when descendant Thomas Shirley finally purchased it. Preston Manor was then handed down through more generations of the Shirley family until the early eighteenth century, when it passed through marriage into the Western Family.

Structural alterations of the house were made in the latter half of the sixteenth century and again in 1738 when Thomas Western incorporated some of the original foundations into the work. In 1793 Preston Manor was described in The Sussex Daily News as being ‘well calculated for a Sportsman or a person of distinction’, it listed the vast accommodation which included eight bed chambers, closets and seven attic rooms for servants. Baron Western sold the manor and surrounding lands to William Stanford, who in 1841 passed the property to his son, another William. This William married Eleanor Morris a year later and they had two children, a son who died in infancy, and a girl, Ellen, born in 1848. When William died, he left five-year-old Ellen to inherit Preston Manor.

Ellen’s mother, Eleanor, married Captain George Macdonald in 1854 and Ellen’s three half-sisters, Flora and twins Diana and Christiana (known as Lily) were born in 1857 and 1866. When George Macdonald died in 1881, his widow, daughters and stepdaughter continued living at Preston Manor. In 1867 Ellen Stanford married her first husband, Vere Fane Benett and, in accordance with her father’s wishes, both Benett and Ellen’s second husband, Charles Thomas, obtained Royal Licence to use the Stanford surname. Ellen and Vere lived with their son, John Benett-Stanford, at homes in Wiltshire, London and Madeira, whilst Preston Manor continued to be inhabited by Ellen’s mother and half-sisters. Eleanor in fact lived there until her death in 1903.

Vere died in 1894, and three years later Ellen married Charles Thomas, a member of a prosperous shipping family. In 1905, Ellen and Charles settled at Preston Manor, making alterations to the appearance of the house and its surrounding gardens that not only reflected their times, but also surely must have reflected their own personalities and idiosyncrasies.

I am certainly now intrigued, not just by the combination of architectural styles that Preston Manor incorporates, but by the people who lived there. Indeed, who could fail to be interested in the story of a mother who had such a strong dislike of her son that she took action to ensure he did not inherit the house that was rightfully his. (Lady Ellen and John Benett-Stanford, last Lord of the Manor of Preston).