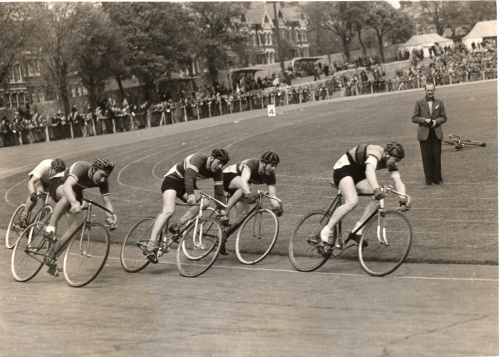 The Oldest, Working Velodrome in the World

During these strange days of Covid-19, when our lives and, in particular, our sporting lives (actual participant or the sofa-type) are restricted as never before, looking back on past freedoms seems like an activity in itself. Like filling a whole afternoon looking through old photographs and feeling worn-out by the endeavour!

In one such moment of reflection, I thought about the Preston Park Velodrome, the place where my sons learned to ride their bikes and we, as a family, watched countless (endless) games of cricket. But this is no ordinary cycle track; it really is something rather special, dating back to the reign of Queen Victoria, it is part of Brighton’s sporting history.

The velodrome, including the cricket ground, was, in fact, recognised as a place of special historic interest in March 1987 when it was placed on the Historic England Register as a Grade II Listed Park and Garden.

It began in 1871, when Brighton Corporation bought land from the Stanford Estate (V F Bennett-Stanford retained ownership of Preston Manor and its walled gardens) and started to lay out Preston Park. The park was formally opened to the public on the 8th November 1884. Construction then moved on to the velodrome, situated in the north-west corner of the park and previously used by the Stanford family as a polo ground.

Work on the velodrome was carried out by the British Army. Soldiers dug out the entire enclosure by hand! On opening, in 1887, the sports arena comprised a cricket pitch, surrounding cycle track, pavilion and open air, flint-edge seating for thousands of spectators. Today it is the oldest cycle track in the country and the oldest, working velodrome in the world. All older velodromes have either fallen out of use or have been redeveloped.

Not only is the velodrome the oldest cycle track, it is the longest at 579 metres (1,900 feet). It is also one of the few velodromes that is not the normal oval shape. It has instead the rather unusual shape of four straight sides and two slightly banked corners. This anomaly is explained by the fact that until the beginning of the 20th century, when Olympic track cycling grew in popularity, there were no international velodrome standards and, therefore, earlier cycling tracks came in all shapes and sizes.

The velodrome was formally opened on the 30th May 1887 at a Whit Monday race meeting with races including a one mile handicap, three mile handicap, half-mile scratch and a one mile tricycle handicap. The entry fee was two shillings and prizes of up to £7 were awarded to those who came first. Riders, unfortunate enough to take a tumble on the cinders surface, were often badly injured and had to repair to the pavilion to have their wounds cleaned with hot water and a scrubbing brush! Improvements in both safety and the amenities followed over time. In 1893 a concrete retaining wall was erected to support the embankment on the north-west corner of the track; a wooden grandstand with seating for 500 people was opened on the 18th October 1930; and in 1936, much to the relief of all riders, a tarmac surface was added.

The 1950s were the golden years of cycling; attendees of 3,000 – 5,000 were a regular occurrence at the velodrome with crowds watching some of the country’s best riders. The largest recorded attendance was achieved on August Bank Holiday 1952 when 8,000 people crowded into the velodrome to see world champion Reg Harris in action.

Reg Harris was five times World Sprint Champion and Double Olympic Silver Medallist; a cycling legend and poster-boy for Raleigh, famous for treating his spectators to races that were as fast as they were dangerous.

The only time racing stopped at the velodrome was during the two world wars and then again in 2015. At this time, the track had fallen into general disrepair due to lack of public funds for ongoing maintenance. Concerns expressed by riders about safety issues and, in particular, the quality of track fencing led the British Cycling Federation to stop official racing. But in the great way that people pull together, a very successful Save Preston Park Cycle Track Campaign was launched. A mass protest ride took place through the streets of Brighton, attended by riders from the cycling clubs and leagues and also hundreds of local supporters from the wider cycling community. Their aim was to demonstrate the value of the velodrome to not only cycling clubs, but to local families and recreational cyclists. Eventually, Brighton and Hove City Council agreed to put money forward along with funding from the British Cycling Federation; the fencing was brought up-to-date and racing resumed in May 2016.

In 2013, St Peters Cricket Club, who had been using the arena since moving to Preston Park in 1889, agreed a 20-year lease with the Council for both the clubhouse and the upkeep of the two cricket squares. The original pavilion is still standing, and the flint edged seating is still around the north and eastern sides of the track. The heyday of cycling may have passed, but Sussex Cycle Racing League host a full calendar of events and do their upmost to ensure that racing at Preston Park Velodrome is still exciting. And young children are still taking their first, wobbly rides around the track.