The Price of Fish 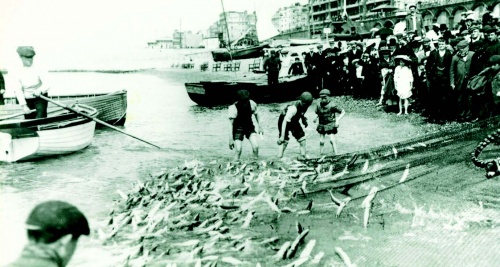 It is recorded that on 14th May 1807 some of the first Mackerel landed at Brighton were sent to Billingsgate in London, approximately eight hours away by post chaise, where they were sold for 40 guineas per long hundred (132 fish) equal to seven shillings (35p) each, the highest price ever known in the market.

These Mackerel, it should be realised, were really big fish, as fishermen at this time used a bigger sized mesh in their nets than in later years. And, as the first Mackerel to arrive in the London market, they were regarded as a real delicacy and a delight to the gentry.

But, as usual, the poor fishermen would have gained little extra profit from this high market value, because the salesman, agents, carters, etc. all had to be paid. Also, within a few weeks, the prices would have fallen dramatically, sometimes to as little as 12 a shilling as the 50 or so Brighton boats, along with boats from other coastal towns, were all out catching Mackerel.

By the 1880s fishing all around England had reached its peak. With up to 80 boats fishing from Brighton, other boats from along the south coast landing at Brighton and fish coming in from all over England by train, the price of fish remained generally low.

From around 1860, despite the uncertainty of fish prices, many Brighton fishermen and fish salesmen invested in larger sailing luggers, mostly second-hand from the West Country, with names like Smiling Morn, Paragon, Mizpah and Maggie. But by the 1920s these boats had begun to die out, due to lack of men to crew them, and were mostly replaced with smaller motor boats.

This year, Mackerel and most other fish have increased tremendously in price, partly because of the small amount of fish we are allowed to catch. The first Mackerel I landed in April 2012 sold at the market for £4.00 a kilo; this would average £1.00 a fish to me. .