Before 1750 Brighton doesn’t appear very often in the history books, apart from a few incidents which receive mention; the first in 1541 when, as part of his divorce settlement, Henry VIII granted various manors to Anne of Cleves including Preston; then when poor Deryck Carver, a brewer from Black Lion Street, was burned to death in Lewes, making him one of the first Protestant martyrs in Sussex; then, more famous than either of these two events, is the episode that links the town with Charles II’s escape from England - Cromwellian forces hot on his heels.

The story of King Charles’ flight after the Battle of Worcester in September 1651, only hours ahead of pursuing soldiers who searched the town in vain, “for a tall black man 6 foot and 4 inches high”, is woven into the town’s folklore, but details of the man who made this vanishing act possible are not so well known.

Nicholas Tattersall of Brighthelmstone was the captain and owner of the Surprise, a thirty-four tons coal-brig. Until approached by Colonel Gounter and asked to convey two passengers to France, he had led an unremarkable life. However, in Gounter’s cover story of two men fleeing a duel, Tattersall saw an opportunity for himself and bargained hard over his fee, eventually agreeing on £60. During these negotiations the King had been in hiding near Salisbury and now began his journey to Brighton, where he stayed the night of 14 October at the George Inn. Which George Inn is disputed, tradition holds that it was located in West Street and was in fact the inn later known as the King’s Head, but it appears that a George Inn also existed in Middle Street and that there was also a cottage called “Ould George” on the west side of West Street; truthfully, Charles may have lodged at any one of these.

When Tattersall joined the party at the George Inn he instantly knew who his passenger was to be. Seeing through the disguise he recognised the King as someone who had taken his ship, as a fishing vessel from Brighthelmstone, a few years previously. This was bad luck for the King, because it opened the way for Tattersall to demand more money, plus insurance for his boat.

The haggling over, Tattersall went home to tell his wife, collect a clean shirt (in recognition of the historical importance of the occasion one imagines) and a bottle of spirits to steady his nerves. By 7 a.m. the next morning the ship was making for open sea and by 10 a.m. the King was put ashore at Fécamp on the coast of Normandy. After the Restoration, Tattersall’s ship was renamed the Royal Escape and taken into the Royal Navy and Tattersall made Captain. In 1663 he retired, returning to Brighton with an annuity of £100 granted to him and his heirs, and then in 1670 he was given the prestigious position of High Constable of Brighton. The same year he acquired the Old Ship Hotel. Tattersall died in 1674 and was buried in the churchyard of St Nicholas’. His tombstone proudly asserts that, “he preserved the Church, the Crowne and Nation”.

The image of Tattersall as a God-fearing patriot and Brighton celebrity does not, however, stand up to scrutiny. He wasn’t a nice man and, whatever merit may have been due to him in connection with the royal escape, his conduct in following years was, to say the least, questionable. He hadn’t been a particularly good sailor and was on one occasion reprimanded for losing some small boats; he was dismissed from the Navy in 1667 for his behaviour during a naval engagement. But his true, malevolent nature only came to the fore when he became High Constable and set about exercising his authority “with the zeal of a bigot, and the malign industry of a ministerial spy” (J Bishop, A Peep into the Past).

One person he persecuted with particular zeal was Anthony Smith, who may have been the landlord of The George Inn. If he was, he gave up this position after Charles’ stay, perhaps through fear of association and punishment, and lived quietly making rope for Brighton’s fishermen. Regardless, of Smith’s obvious desire to keep a low profile, Tattersall feared that one day he might have to share the glory, and presumably future rewards, for having helped the King with Smith.

Mostly he liked to persecute Quakers and religious nonconformists. On one occasion he discovered a house, owned by William Beard, where he believed Dissenters met. Tattersall gained a Warrant and broke the door down, but found no minister or group engaged in any sort of religious ceremony. One of his minions did, however, say that voices had been heard, “in the elevated tone of prayer or instruction” and, for this imputed offence, the group were summoned before the Justice at Lewes and fined £20. But this wasn’t enough for Tattersall, he thought the Dissenter had got off too lightly, so he broke into Beard’s malthouse and stole 64 bushels of malt – later selling them for personal profit. The historian, John Bishop says with great sarcasm, “Verily, Tattersall’s memory deserves to be held in honour!”

Tattersall may no longer be honoured, but the Royal Escape is still remembered once a year in Brighton with the spectacle that makes up the biggest off shore yacht race in Sussex. 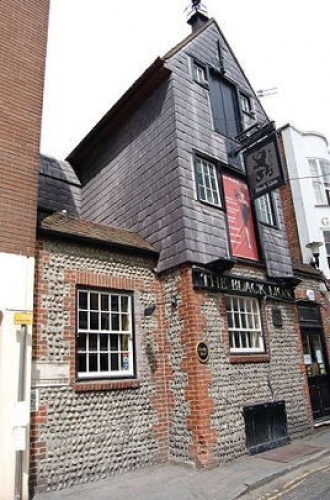 Photo by Tony Mould. The Black Lion brewery was established in 1546 by Deryck Carver. Carver was the first Protestant to be martyred under Mary I.