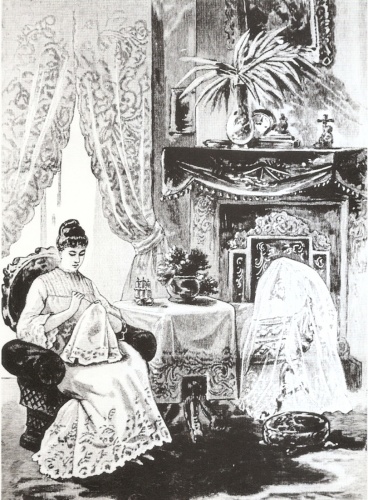 Traditionally females have been associated with needlework and embroidery. This frontispiece comes from Needlecraft: Artistic and Practical, 1889

Needlework and embroidery are embedded in women’s history, chiefly considered a domestic craft and entwined with traditional notions of femininity. Yet men have also embroidered and a broader analysis reveals how embroidered textiles have often used pictures and words to convey powerful messages and complex meanings.

In medieval England luxury textiles for the church, royalty and the nobility were embroidered using silk, metallic threads, pearls and jewels on linen, silk or velvet cloth. Nuns and amateur embroiderers produced decorative embroidery from as early as the 8th/9th centuries and magnificent Opus Anglicanum (‘English work’) – as it came to be called - was admired throughout Europe right through to c.1500. Much of this renowned English embroidery was professional work carried out guild workshops, or in workshops attached to aristocratic households or in monasteries and nunneries: usually run by men, the embroiderers were both male and female.

The most famous medieval embroidery is The Bayeux Tapestry – not a woven tapestry at all, but a vast embroidered cloth worked in coloured wools on linen, measuring 50cms high and 70ms long. Commissioned probably during the 1070s by Bishop Odo of Bayeux, half-brother of William the Conqueror, and stitched by English embroiderers, the pictorial narrative relates the events surrounding the Norman conquest of England in 1066. Crucially, it records how King Edward the Confessor (d.1066) had earlier promised William, Duke of Normandy, the English throne and how Harold had sworn to support his cause – assertions on which William’s claim and justification for invasion were based. The ‘Tapestry’ was a piece of powerful political propaganda in embroidered form.

Artistically and politically, embroidery remained a leading medium of communication in England, employed along with painting and sculpture to reinforce the power of the church, the crown and nobility. In particular, the development of heraldry from the 11th century onwards fuelled demand for embroidered emblems as a means of visual identification on the battlefield. By the 1300s not only did a man demonstrate his political allegiance and personal status through richly embroidered doublets and tunics in designated colours and motifs, but his wife could also have her garments embroidered with her own family coat of arms juxtaposed with his.

During the 1400s and 1500s, when Renaissance thinking highlighted the essential differences between the sexes, a new and more powerful link was forged between women and embroidery, a pursuit now deemed the ideal occupation for the successful merchant’s wife. In Tudor England this also dovetailed with a rise in amateur embroidery, encouraged by a growing desire among the newly-affluent classes for fine embroidered clothes and interior furnishings, from sleeves, bodices and aprons to sheets, cushions and table covers. Heavily-embroidered scented gloves were particularly significant: worn as status symbols and exchanged as elite gifts, Queen Elizabeth I even employed a servant specifically to care for her gloves in their scented boxes.

Elizabethan embroidery embodied both naturalism and symbolism, each flower, bird or animal worked in thread carrying various meanings determined by its physical qualities, medicinal properties and heraldic associations. Notably, the ubiquitous embroidered rose carried considerable symbolism, its scent thought to comfort the heart and quicken the spirit, while dynastically it signified the unification of the Houses of York and Lancaster under Henry VII. Emblems and mottoes characterised the fashionable intellectual and cultural preoccupations of the Elizabethan and Jacobean upper classes, their use occurring in literature, art and conversation. Hence the emblematic embroidery created by high-ranking females in the mid/late-1500s and early-1600s, used witty plays on words and advanced visual symbolism to suggest personal sentiments and relationships and represent political ideas.

By the 17th century embroidery instruction was considered essential for middle- and upper-class girls – a genteel accomplishment taught in such a way as to inculcate patience and compliant, subservient qualities that would persist throughout adult life. Learning at home or at school, girls now had to master challenging embroidery techniques via structured sequential projects: strictly measured bands or rows were used for disciplined stitching of alphabets, stylised flowers and figurative work, often biblical scenes. As both an educational exercise and individual test of embroidery skills, this was the embroidered sampler as we know it. A tool for impressing moral sentiments upon young girls, the sampler came to define a daughter’s childhood, charting and symbolising her progress towards womanhood. There was little scope for resistance, but a few questioned the evolving ideology of feminine obedience and subjugation, through their samplers. One stitched this verse:

When I was young I little thought That wit must be so dearly bought But now experience tells me how If I would thrive then I must bow And bend unto another’s will That I might learn both care and skill To Get My Living with My Hands That So I Might Be Free from Band And My Own Dame that I may be And free from all such slavery.

Images of married couples were typical of 17th-century samplers and this iconography was transferred to embroidered pictures, notably the ornate raised embroidery known as stump work, popular c.1650-1700. In Stuart stump work the same pastoral scenes involving flowers, animals and fashionable ladies and gentlemen in tree-filled gardens occurred repeatedly and often such pictures symbolised royalist sympathies during the Interregnum (1649-1660). Sometimes royal figures featured; otherwise the frequent inclusion of lion, stag and leopard suggests the supporters of the royal arms; the caterpillar reputedly symbolised King Charles I (executed in 1649); while the butterfly signified the Restoration in 1660.

During the 1700s embroidery became more natural and botanical, as reflected in pastoral scenes, the vogue for embroidering flowers from nature and the newly-interchangeable terms ‘to embroider’ and ‘to flower’. The pursuit was still a privileged occupation for amateur enthusiasts, not considered ‘work’, but with the Industrial Revolution a new generation of females was employed in ‘dotting’ and ‘tambouring’ the fine muslins being manufactured in textile mills. By the 1790s children as young as 6 or 7 were apprenticed to produce flowered muslins and many worked as low-paid outworkers – essentially sweated labour.

By the 1800s women from virtually all social backgrounds embroidered at some level and the merits, or otherwise, of needlework often entered debates about women’s lives. Some found solace in sewing, but detractors considered it the major cause of unhappiness among women starved of intellectual stimulus. Wives, sisters and daughters embroidered slippers, smoking caps, footstools and all manner of ‘comforts’ for their menfolk, as well as cosy room furnishings, to express affection, devotion and stronger sentiments that they could not always openly utter - or sometimes as a substitute for the love and harmony absent from the home.

Conversely embroidery was beginning to be used more publicly to try to change ideas and embroidered marching banners began to identify various groups, from local organisations to individual campaigns and professions. Banner-carrying demonstrations had emerged with the Trades Union Movement from the 1830s and, inspiring the feminist movement, suffrage banners were a major feature of the Women’s Social and Political Union marches and demonstrations during the early-1900s. Not only banners but also parasols were embroidered in the Suffrage colours of green, purple and white with the initials WSPU and content that aimed to present the Suffrage Movement as supporting equal rights. Afterwards, imprisoned and on hunger strike, women embroidered handkerchiefs with their signatures, cleverly combining political petition and protest with the female social tradition by which guests embroidered their signatures for their hostess, commemorating a visit. The suffrage banners and other embroideries, which also used paint, collage and other media unleashed a new creativity which came to influence the future teaching and practice of embroidery. 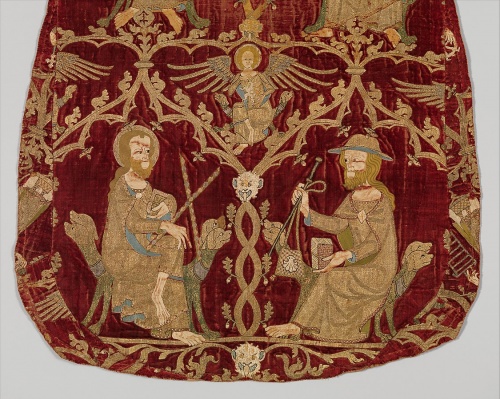 An embroidered chasuble, 1330-1350, demonstrates the famed medieval ‘Opus Anglicanum’ carried out in religious and secular workshops by men and women 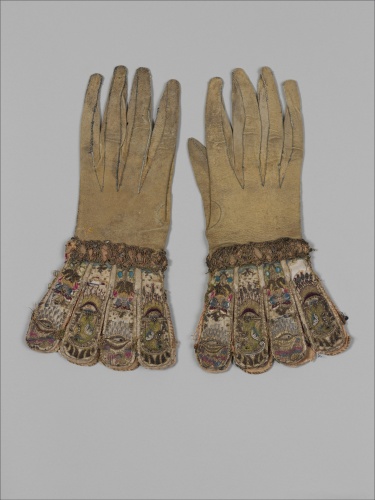 Handsome embroidered, scented gloves were fashionable in the late-1500s and early-1600s 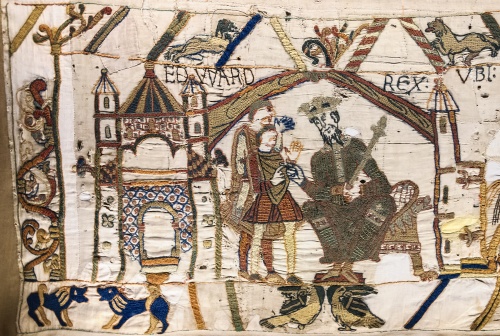 Scene from the Bayeux Tapestry, worked by English embroiderers, 1070s, as a piece of political propaganda reinforcing the legitimacy of the Norman invasion 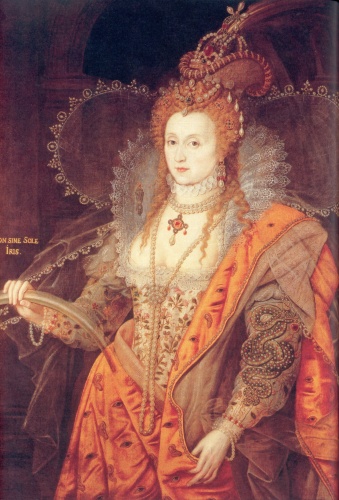 ‘The Rainbow Portrait’ c.1600-1602 uses complex embroidered motifs and other ornamental symbolic emblems to represent the majesty and power of Elizabeth I 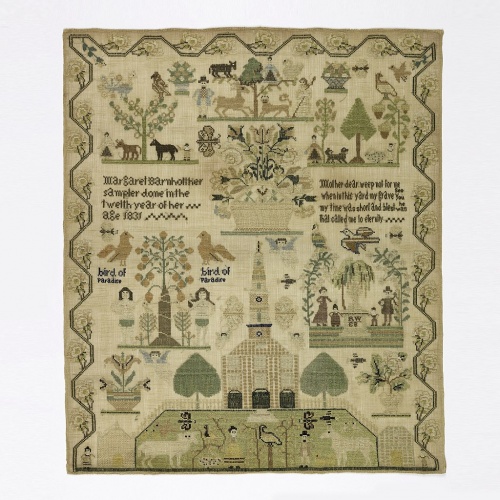 Embroidered samplers date back to the 1600s: this example was stitched by a 12-year old girl in 1831 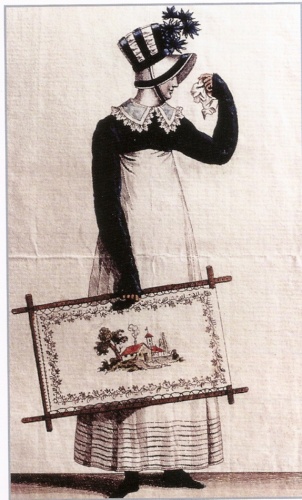 By the Georgian period, privileged women spent much of their time embroidering pictures and dress items. This Regency fashion plate dates to 1814 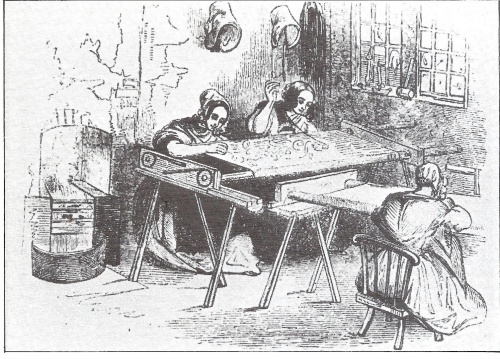 As the textile industry became mechanised, machine-made fabrics were often embroidered by poor women and children. These homeworkers were pictured embroidering net in 1843 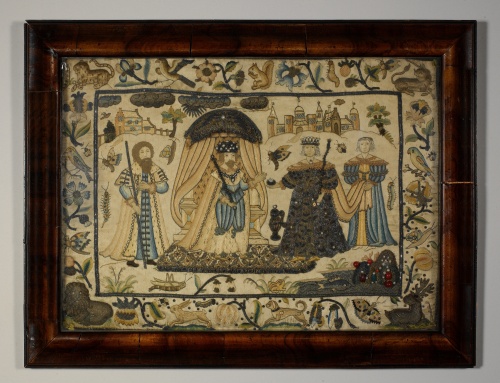 Raised stumpwork silk and metallic embroidery of the Stuart era was often politically-themed, demonstrating royalist sympathies during the Interregnum 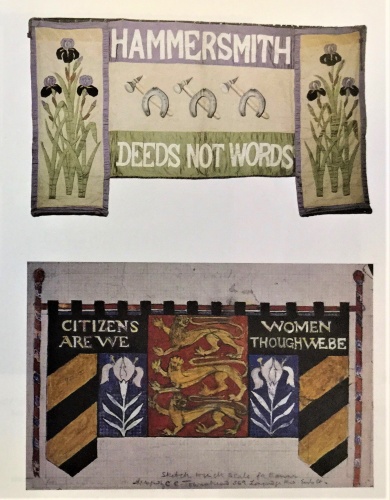 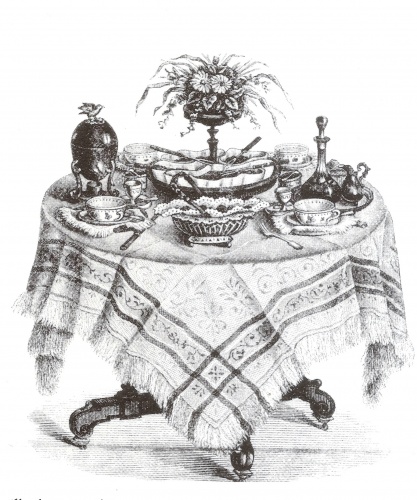 Victorian women embroidered all manner of decorative items for the home and their families, like this damask embroidered breakfast cloth, 1878