Henry Ratty’s cottage and the Bazaar can just be seen under the sea-wall by the pier entrance. Image reproduced courtesy of The Royal Pavilion and Museums, Brighton & Hove.

In conversation with my friend Lavender, I mentioned that I was looking for a Brighton “character” to write about and she suggested Henry Ratty. How could I resist such a name? Disappointingly though, my research failed to uncover a tale of passion, sacrifice or murder, but he can be credited with a sort of celebrity, at least historian John George Bishop, writing in 1897, thought so: “There were few men better known to Brighton visitors and residents than Mr Henry Ratty. He was regarded as a Brighton “character” and his good-tempered, smiling features, and obliging manner were long borne in remembrance by many old Brightonians”. It can also be said that Henry was closely associated with a golden period in the town’s development, when, for a time, it was the busiest cross-channel port in Britain.

Henry Ratty was the toll-collector at the western entrance to Brighton’s Chain Pier.

By 1820, Brighton was established as a fashionable resort, offering, among its attractions, a gateway to and from the Continent – the quickest route between London and Paris. But there was a drawback; without a landing stage, the steam packets had to anchor off the beach and the passengers had to be rowed ashore in small boats and their luggage, horses and vehicles ferried on rafts. Such a situation led, perhaps inevitably, to a form of exploitation, with the boatmen charging more than the price of passage across the channel and, to make things worse, even a slight swell could be hazardous to life and luggage. It was obvious that a jetty was needed and, in 1822, Captain Samuel Brown was engaged to design and engineer a pier. A location at the foot of the Old Steine was proposed but, following objections from locals, was moved east to below the New Steine. The construction was similar to a suspension bridge with iron links supporting a suspended wooden deck. Oak piles supported the four pyramid-shaped cast-iron towers from which were suspended the chains that gave the pier its name. There were four of them on each side, carried 54 feet through cottages and a bazaar (about which more later) and firmly anchored to iron plates embedded into the cliff opposite. It was the first of its kind ever erected.

The pier was opened on the 25th November 1823 with no expense spared on ostentatious flourish and display. It immediately became a big attraction, not just for cross-channel passengers, but for promenaders who were very taken by the near biblical experience of walking on water.

Visitors gained access down a flight of steps from the New Steine or they came via the main entrance, which was located at the original site in the Old Steine, and made their way along a private esplanade to the pier proper. And, if they came this way, they would have paid their two pennies, or a guinea for an annual ticket, to Henry in his toll-house. (Incidentally, 2d was reckoned by many to be a “monstrous charge”.)

The 1851 census tells us that Henry was born in Andover, Hants and, along with his wife Isabella and daughter Caroline, lived at Chain Pier Lodge – a pretty cottage built up against the sea wall, complete with Regency balcony through which the pier’s chains passed. Right next door was the Royal Chain Pier Bazaar, with bazaar keeper Alfred H Penny. The bazaar remained under the cliff until 1927 when it was demolished during the reconstruction of the aquarium and its arcade, but in Henry’s time it contained a library, saloon, telescopes and a camera obscura on the roof.

Just south of the toll-house was another structure that has now disappeared from memory. It was a water-wheel, operated by a donkey and used to raise up seawater to wash the streets. It was destroyed by the wind and the waves in the so-called “birthday storm” of November 1824.

From the very beginning, the pier and its associated buildings had the weather to contend with. There were three notable storms during the first 13 years of its existence. Interestingly, after the second, in October 1933, when it was struck by lightning, the people of Brighton were so upset at the thought of losing their pier that they raised the money, through public subscription, to pay for the repairs. Such generosity was not, however, forthcoming the next time the pier came under siege.

Rain or shine, Henry was there. He saw wild weather, near disaster and something completely new – the development of the first “pleasure” pier. It really did not take the pier operators long to recognise the potential of enhancing the simple attraction of seeing, feeling and experiencing the sea, with a range of commercial facilities and entertainments. Bishop says Henry was somewhat deaf and when asked any question he would always reply “tuppence please”, but contemporary images give a more romantic vision of a tall, upright man standing in the entrance to his toll-house, pretty pleased with himself and the thousands of people who passed through his turnstile every day – on two Sundays in July 1824 as many as 3,000 each day.

Henry died in 1858 and was succeeded in his job by his daughter, Catherine - at the time remarkable for the number of rings she wore. On the removal of the toll-house Caroline officiated at the aquarium for a while, but ended her days in 1881, working as a dressmaker and living off St James’ Street. Henry’s son made a model of the chain pier in wood which was shown in the Grand Exhibition of 1851 and, whilst a work-in-progress in his workshop in Bond Street, became a must-see attraction.

Henry is buried in the Extra Mural Cemetery, the exact location now lost from sight - “nature’s pleasant robe of green enwraps his monument and his memories”. The chain pier’s final demise came in 1896 when it was totally destroyed by a storm, while awaiting demolition. Its position marked by a plaque in the sea-wall above the eastern end of the aquarium sun terrace. 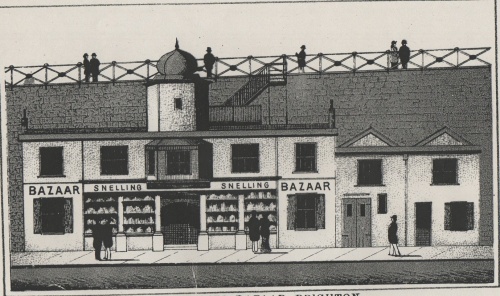 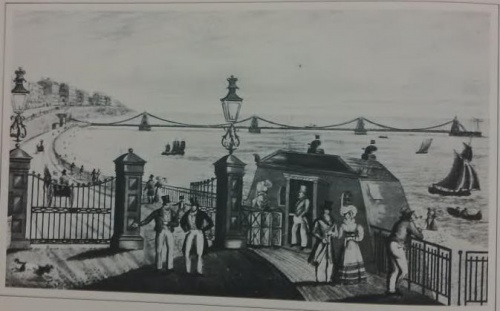 Entrance to the esplanade leading down to the Chain Pier with Henry Ratty’s toll-house. Reproduced courtesy of The Royal Pavilion and Museums, Brighton & Hove 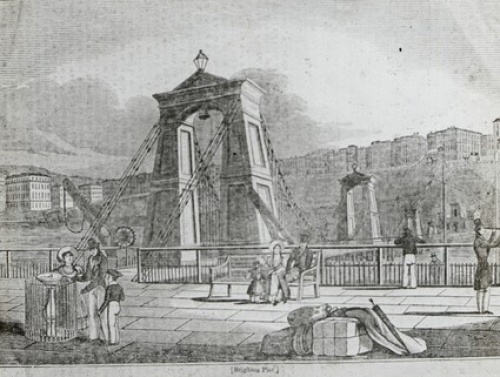 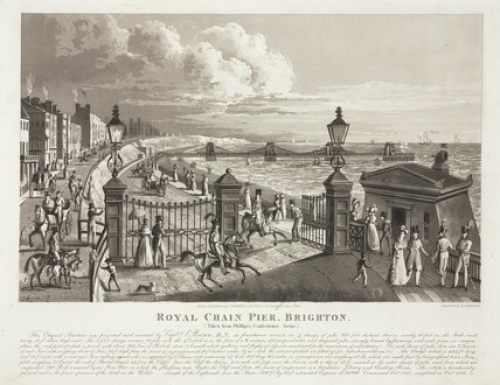 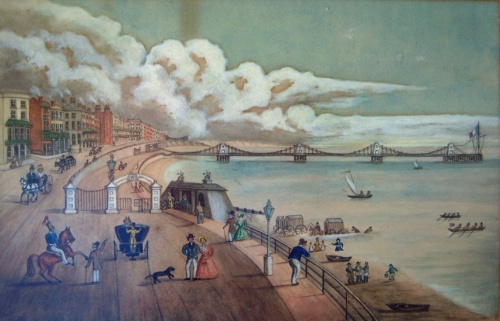 The Times reported that “to a man of pleasure and the valetudinarian [a person who is unduly anxious about their health] it offers a marine promenade unequalled”. Image reproduced courtesy of The Royal Pavilion and Museums, Brighton & Hove. 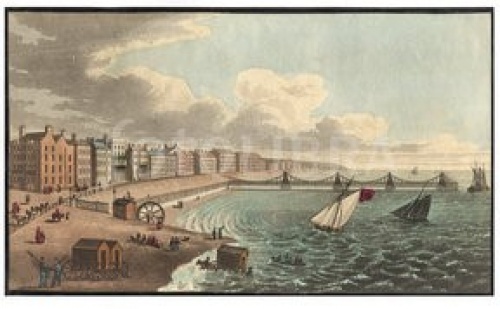 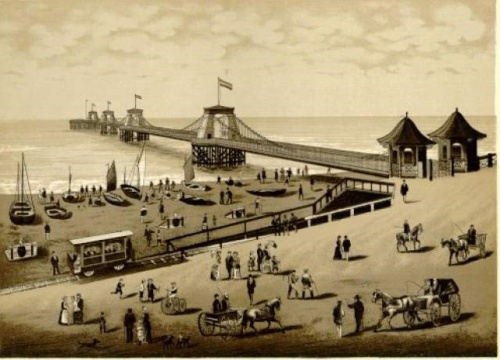 The esplanade was later sold to the aquarium and the entrance to the pier was relocated to where it met the shore as seen above. Two toll-houses were added, and these still survive today as shop kiosks on the Palace (Brighton) Pier. Image reproduced courtesy of The Royal Pavilion and Museums, Brighton & Hove. 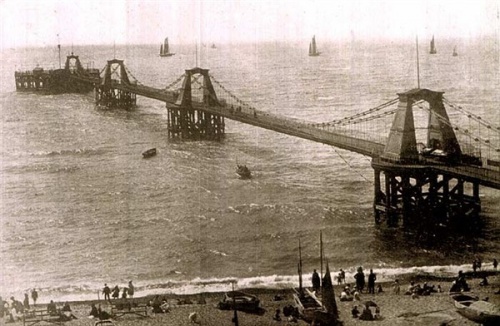