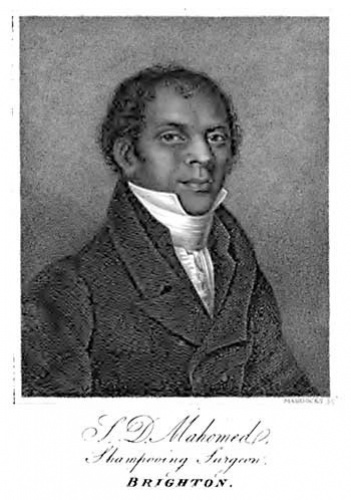 Frontispiece of the bestseller, S. D. Mahomed, Shampooing Surgeon, Brighton. In this book, which ran to three editions, Mahomed portrayed himself as an expert in Indian medical arts.

The history of Asian immigration to Britain does not begin in the 1950s, with post-war labour demands; it goes back much further to the founding of the East India Company in the 1600s and an early and distinctive chapter in this history features Sake Dean Mahomed (also Deen Mohomet). Travelling from India to make a home here, Mahomed demonstrated a resourcefulness and adaptability that was quite remarkable. His skill at reinvention enabled him to move from boy soldier in India to our very own Dr Brighton and, along the way, be the first Indian to publish a book, own a restaurant and do “shampooing” in England.

Mahomed was born in Patna, India in 1759. When he was 11 years old he joined the East India Company’s Bengal Army. He then spent 13 years, serving under British Captain Godfrey Baker, marching up and down the Ganges Plain helping bring vast areas under British rule until, at the age of 25; he resigned his commission of Subidar (Indian lieutenant) and accompanied Baker to Cork.

On arriving in Ireland, Mahomed took on the role of Baker’s house manager. He was, however, more than an employee; Baker treated Mahomed like a son and paid for him to study English language and literature. At school Mahomed met Jane Daly. She was the daughter of a wealthy Irish, Catholic family and, in no time at all, the pair eloped. Mahomed may have converted from Islam to Protestantism, but since Protestant/Catholic marriages were illegal, their multi-cultural union must have been quite hard for people to accept.

Pubic recognition, of a more welcome sort, came in 1794 when Mahomed demonstrated his standing as a man of letters by writing and publishing his two volume autobiography: The Travels of Dean Mahomed. This was the first book that an Indian-born author had written in English. It was intended for Anglo-Irish readers and offered them a unique opportunity to glimpse life in India from a native’s point of view. After achieving some notoriety in Ireland, Mahomed moved his family to London, where he got a job as an assistant in Sir Basil Cochrane’s vapour baths. (Cochrane had established a charitable steam-bath in his London mansion, as a way to improve his reputation for corrupt self-enrichment, gained while working for the East India Company.) Mahomed, ever resourceful, enhanced these baths with a practice that elaborated on “champi,” a derivative of the Hindi word for a head massage. (Champi became anglicized as “shampooing”.) This treatment involved first lying in an herbal steam bath; then a therapeutic whole-body massage, given by an assistant working through sleeves in a flannel tent-type cover.

In 1806, Mahomed married again. He testified in an Anglican church to his unmarried status, but this wasn’t true – his first wife was still alive - a lie of convenience, perhaps, to get around the fact that divorce at this time required an Act of Parliament.

At the age of 51, Mahomed was ready to start his own business. He had introduced shampooing to England now he wanted to exploit his Indian background in a different way. He opened a restaurant, the Hindoostane Coffee House and, as the first Indian owner of a curry house, he offered his customers an authentic Indian experience with bamboo furniture, curry, and hookahs with Chilm tobacco. He hoped the British, who had served in India and missed the cuisine, would flock to his restaurant. Unfortunately they didn’t and Mahomed had to petition for bankruptcy in 1812.

To revive his career, Mahomed decided to move to Brighton, where the ongoing reconstruction of the Royal Pavilion made all things oriental fashionable and he could capitalise upon his Indian identity once again. He found employment in a bathhouse and reinvented himself as the “Inventor of the Indian Medicated Vapour Baths...” To enhance his professional reputation, Mahomed adopted the title “Sake”, a variation of sheik or “venerable one”, and embellished his background to include medical training and experience as a surgeon for the East India Company. (To make this claim plausible he added 10 years on to his age.)

Mahomed offered shampooing, “at his expert hands”, and advertised his Indian oils and herbal treatments as ‘a cure to many diseases and giving full relief when everything fails; particularly rheumatic and paralytic, gout, stiff joints, old sprains, lame legs, aches and pains in the joints’. Business boomed and he was soon able to adorn the walls of the bathhouse with crutches and other paraphernalia belonging to those he claimed to cure and take on the mantle of Dr Brighton.

Mahomed opened his own establishment - Mahomed’s Baths - on the site that is now the Queen’s Hotel, Kings Road, in 1821. The luxurious facilities offered attracted an upper class clientele, including Kings George IV and William IV. George was, in fact, so convinced of the efficacy of the Indian-style treatments he had a vapour bath installed in the Royal Pavilion and appointed Mahomed “Shampooing Surgeon to the King”. Fashionable success enabled Mahomed to open a London branch of his bathhouse, but as he entered his mid-80s, he faced financial difficulties and lost Mahomed’s Baths. Within a decade, his proprietary Indian medicated bath method became known as the Turkish Bath and shampooing became just plain old hair washing.

Over his lifetime, Sake Dean Mahomed travelled through many different worlds, making and remaking himself as he went. Using his cultural identity as an Indian, hard work and invention he not only created a life for himself in England, but a special and historic place in every society he entered. 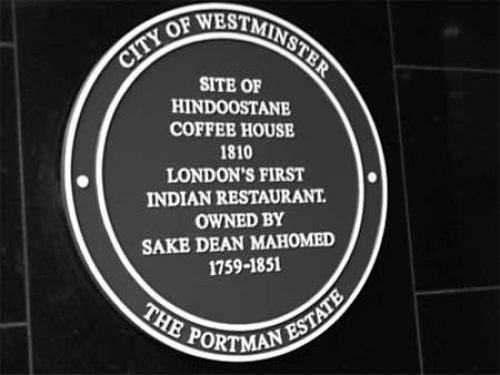 In 2005 the Lord Mayor of Westminster unveiled a plaque marking the spot where Mahomed’s restaurant stood, at 102 George Street. The Epicures Almanak of the day had described it as a place "for the nobility and Gentry, where they might enjoy the Hookha with real Chilm tobacco and Indian dishes of the highest perfection". 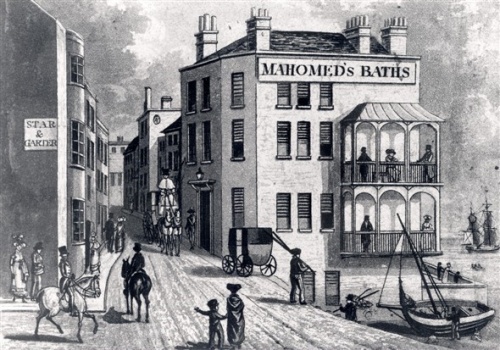 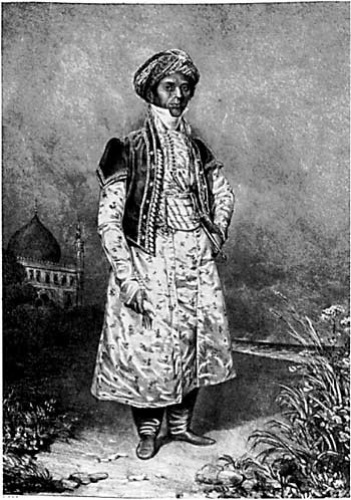 Mahomed was a colourful part of local society, especially when dressed in a costume modelled on Mughal court dress. 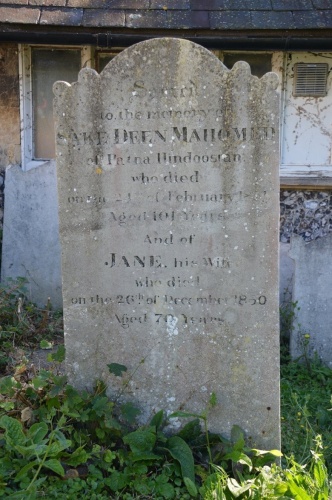 Mahomed’s grave marker in St Nicholas’ churchyard. It reads “Sacred to the memory of SAKE DEEN MAHOMED of Patna Hindoostan who died on the 25th of February 1851 aged 101 years and JANE his wife who died on the 26th of December 1850 aged 70 years. Photo by Tony Mould, printed courtesy of www.mybrightonandhove.org.uk