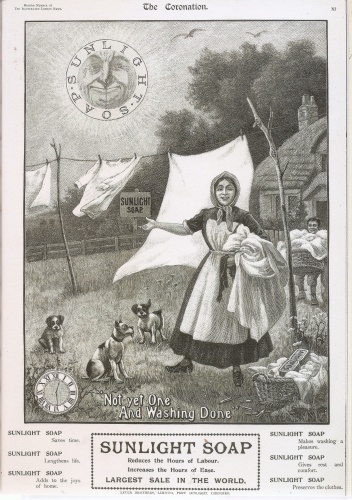 Ideally washing was pegged on a line and dried outdoors in the fresh air. This advert for Sunlight Soap in the Illustrated London News, 1902, makes wash day appear quick and easy

Today doing the laundry is a quick, mechanised task, yet less than a century ago wash day was a laborious process, a major domestic ritual.

Historically garments were considered valuable possessions and our forebears understood the materials from which their clothes were fashioned, selecting appropriate cleaning methods for each. Until the 1920s when artificial silk (rayon) heralded a new era of easy-care synthetic textiles, all fabrics were woven from natural fibres: linen, cotton, silk, wool and mixed grades. Many dress items were difficult to care for, like formal gowns with complex draperies and fragile trimmings – sometimes unpicked before washing, then stitched up again. Fine apparel couldn’t be immersed in water, so layers of washable cotton or linen underwear, separate collars and under-sleeves protected costly fabrics from direct bodily contact.

Outdoors in urban streets and country lanes floor-length Victorian and Edwardian garments attracted dirt, so mud, dung, dust and soot were vigorously brushed, using clothes brushes. This also applied to men’s coats, jackets, waistcoat and trousers. In the 1800s there were no commercial dry-cleaners, but professional specialists refurbished luxury items including lace and fur. If a silk bodice or velvet smoking jacket became stained with grease, candle-wax, food, wine, tea or coffee, then the woman of the house followed traditional home recipes or tips from domestic handbooks, using chemical solvents or natural products from larder or garden.

Wash day usually began on Monday, food being pre-prepared on the weekend or left-over cold meat, pickles and pudding from Sunday used up, to avoid cooking on laundry day. All capable females helped with fetching and boiling water, rubbing, scrubbing, rinsing and wringing clothes – an arduous, wet and steamy business. Washing, drying and ironing generally took several days, larger families employing a general servant and/or visiting washerwoman. Country mansions often had a dedicated wash-house plumbed with hot and cold water: some also boasted ironing and drying rooms, teams of laundry maids completing the work. In town houses, washing was typically conducted in the basement, where there might be a direct water supply. Some country cottages had a small lean-to washhouse, the water heated by a copper, but in tiny two-up, two-down homes washing took place in the kitchen/general family room, amongst children, pets and everyday clutter. Unsurprisingly those who could sent their washing out to a local laundress or washerwoman.

Washing numerous cotton and linen garments using soap and hot water was an arduous process. A good washerwoman first examined items, soaping soiled areas, then hand-washed everything in warm soapy water twice, before passing articles through the wringer or mangle, then double-checking for stubborn stains. In the 1800s washing was mainly done in a large oak or earthenware tub, using a three- or four-legged pole or ‘dolly’ for ‘possing’ (pounding) clothes, or a corrugated ‘peggy tub.’ Rudimentary washing ‘machines’ comprising cumbersome hand-operated wooden boxes that rocked or rotated clothes appeared in the early-1800s and later steam-driven models, but many women were suspicious of ‘new-fangled’ apparatus. Early electric household washing machines developed in the 1920s, automatic versions in the 1930s; from mid-century more homes acquired these appliances.

After initial hand-washing, linens were boiled in a copper pot half-filled with hot soapy water and simmered. Basic Victorian yellow household soap was bought in blocks, cut into smaller bars and dissolved in boiling water, forming a powerful soapy solution for immersing clothes. Some women used alternative detergents like paraffin, an excellent grease solvent, and in 1884 Lever Brothers launched the first packaged and branded laundry soap, Sunlight Soap. After washing and boiling, linens were rinsed in hot and cold water, to remove traces of soap, soda and other cleaning agents. It was customary to blue the final rinse, turning yellowing fabrics into a more acceptable grey-white. The blue was often smalt (ground cobalt glass) or lumps of indigo and starch called ‘stone blue’, inside a cloth bag. To whiten linens further sometimes products like saltpetre and borax were added to the water. After many hours of lifting wet, heavy clothes and filling, emptying and re-filling of tubs the washed linen should be of good colour and fresh-smelling.

Men’s white shirts were laundered with linens, but then needed effective starching. Rice starch produced a good glazed finish, while corn starch could be home-made. Starch was mixed with substances like paraffin, borax with milk, or white wax, to obtain the shine that helped prevent dirt from attaching to the shirt fabric. White caps, aprons and frills were also stiffened, and many women used a very thin, diluted water starch on cotton and linen underwear, to facilitate washing and improve appearance.
Woollen clothes like flannel underwear and knitwear were widely worn from the late-1800s onwards. Easily ruined in the normal wash, ideally woollens were plunged straight into a mixture of warm (never hot) soapy water and ammonia, then gently swirled about before rinsing. Bright red flannel petticoats and other coloured garments were washed separately, to avoid fading or streaking the colours with harsh cleaning agents.

Heavy wringers or mangles with large rollers were used to squeeze water out of wet washing and to flatten sheets and towels, later models smaller, often attaching to the wash tubs. After wringing, clothes were dried indoors over a clothes horse or ceiling ‘maiden’ but outdoor drying was better, for natural bleaching of whites in the sunshine and to minimise unhealthy damp atmosphere inside the house. Countrywomen might lay washing out on the grass or on hedges, but generally it was pegged on lines. In built-up city neighbourhoods wet clothes were suspended from lines stretched across narrow streets, the rags of poorer families tied to sticks hung from windows.

Ironing clothes was also time-consuming, different articles needing different irons. The basic triangular metal flat-iron was heated on the stove or before the fire and held using a padded holder. Clothes were easily scorched, although experienced laundresses gauged the temperature by holding the iron near their cheek or spitting on it. Flat-irons were effective for large expanses like shirt bodies and petticoats, whereas box-irons, hollow and filled with hot coals or metal bricks, were preferred for fragile garments and details like dainty collars. Many female items, from caps to petticoats, were embellished with rows of frills and preserving their shape required special goffering/‘gauffering’ irons. In 1882 an American ‘electric flatiron’ was patented but few British homes had mains electricity before the 1920s, some much later. From 1938 Morphy Richards made a modern electric iron with temperature control, another labour-saving device to help post-war women with wash day. www.jayneshrimpton.co.uk 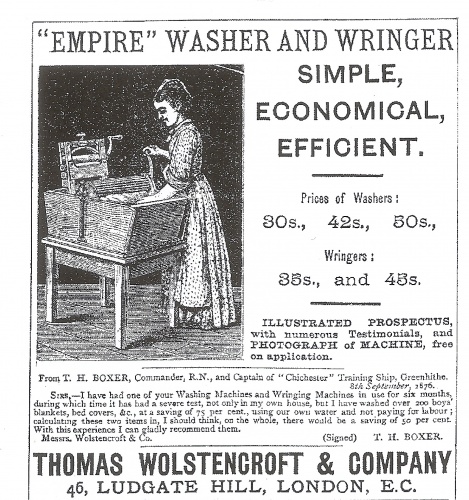 This advert from Whitaker’s Almanack, 1878, shows one of many Victorian ‘machines’ that aimed to make washing and wringing clothes easier, but all were manually operated 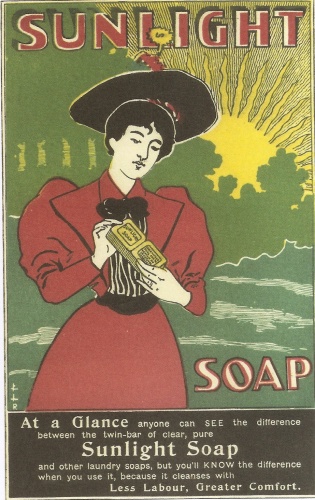 Laundry soap was the basic cleaning agent for washing ‘whites’ and other items. Sunlight soap was the world’s first branded, packaged laundry soap, seen here in a poster of c.1895-96 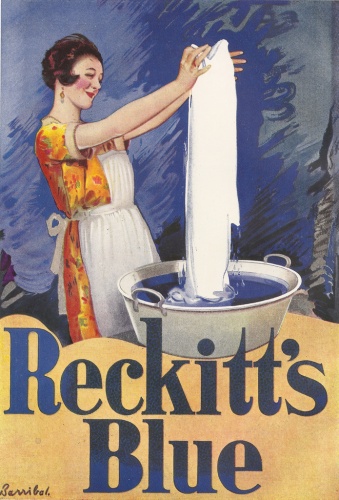 Traditionally blue was added to the final rinse, initially deriving from blue cobalt or indigo. Reckitt’s Blue, seen here in an advert from c.1925, was world-famous since the 1800s 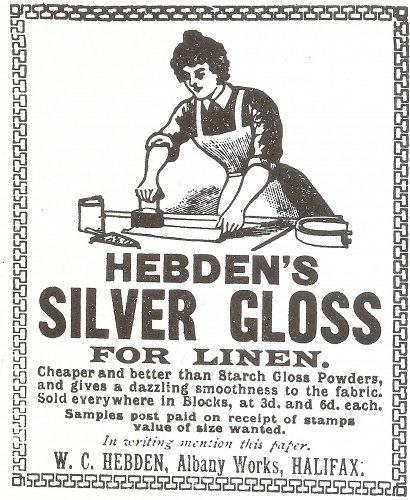 Starching shirt collars, cuffs and fronts was important, a shine or glaze helping to prevent dirt. ‘Hebden’s Silver Gloss’ promised to replicate the effect, as seen in this advert, c.1900 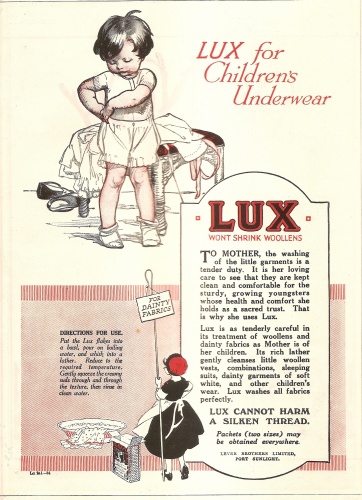 Woollens, such as children’s dainty underwear, were popular in the late-1800s and early-1900s and needed gentle washing, as highlighted in this Lux soap advert from 1922.

This advert c.1890 is for a brand of ammonia, a gentle bleach often used to whiten or lighten yellowing woollen or flannel items 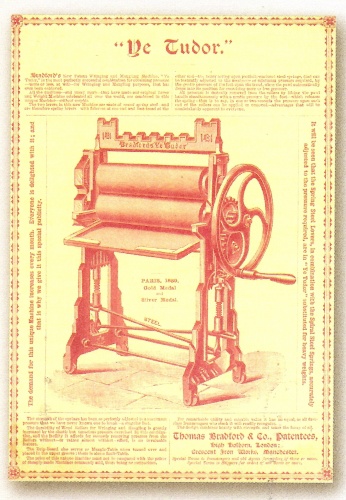 Wringers and mangles squeezed the wet out of newly-washed clothes via two rollers. Many new Victorian models were introduced, such as the ‘Ye Tudor’ mangle, 1889 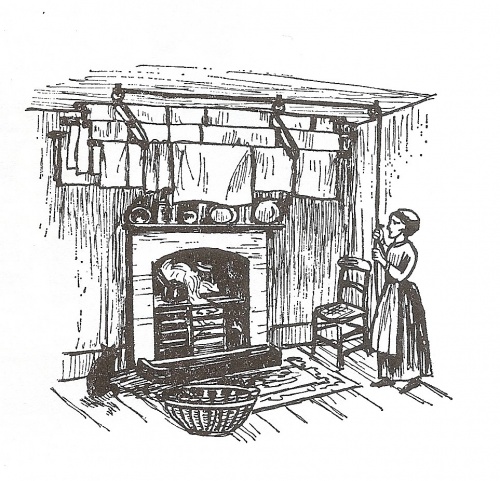 . Washing sometimes had to be dried indoors. This illustration depicts the Barnes Patent Clothes Drier and Airer, 1889, a contraption suspended from the ceiling near the fire 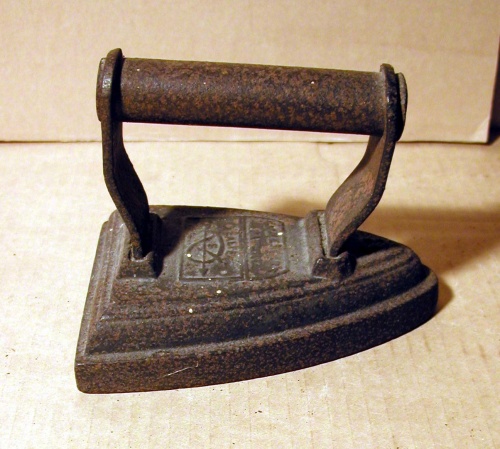 Until the advent of electrical irons, most basic ironing was done with a heavy metal flat-iron, which had to be heated on the stove or over the fire, then handled using a cloth [Wikimedia Commons]