The Witches of Brighton and Sussex 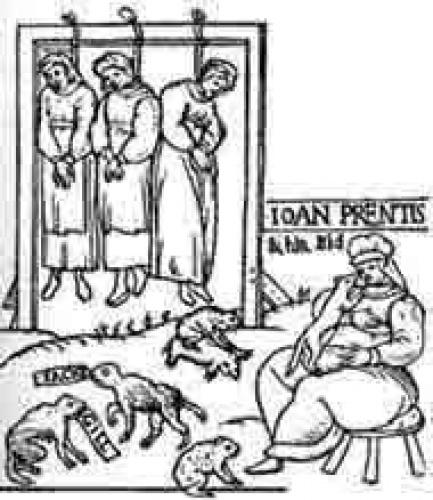 The public hanging of three witches in Chelmsford in 1589. 80% of those who died during the witch panic which began mid 14th century and peaked between 1580 and 1630, were women and the majority of them were old and poor.

It’s Hallowe’en soon and witches will be abroad. There may be covens of witches in Brighton and Hove preparing to celebrate the ancient magic of witchcraft at this very moment. Who knows? Perhaps the people living next door to you are followers of Wiccan. The neighbours of Doreen Valiente, who had a flat at 6 Tyson Place, Grosvenor Street, Brighton, certainly lived next to a witch, indeed, some called her ‘Queen of the Witches’.

Doreen was initiated into the Wiccan religion and became high priestess of a coven in north London in 1953, just after the practice of witchcraft stopped being illegal in Britain. She moved to Brighton a few years later and started her successful career as an author and witch. From 1964 she was president of the Witchcraft Research Association and wrote a series of books which popularised Wicca and made her the best known witch in Britain.

Doreen died in a nursing home in Sackville Road, Hove in 1999 and was cremated in Brighton following a Wiccan funeral service.

Doreen claimed that in the past every community had its witches and, depending on your time and place, the idea of the female witch took different forms. Witches have been considered doctors, midwives, astrologers, clairvoyants and prophetesses, but they have also been seen as resentful old hags, warty and cruel with powers to cause suffering and harm, to kill livestock, ruin harvests, spread disease and death. Most sinister of all, was the witch as possessed devil worshipper.

This heretical, anti-Christian image was at the heart of the murder, by the Church and State, of thousands for crimes we, and to be fair most people since the Enlightenment, would consider laughable. And this atrocity didn’t take place in the Dark Ages, but in the 16th and 17th centuries, at the height of the Renaissance. In 1611, when Macbeth’s witches were on the stage at the Globe Theatre, those accused of being real-life witches were being tortured, hanged and burned.

Sussex, for some reason, came through the witch panic relatively unscathed. Despite the frequency of witch trials around Europe, the 1558 – 1736 Home Circuit Records list only 16 people prosecuted for witchcraft in this county (three men and 13 women and only four of them were found guilty). In 1572 Joan Usbarne was accused of bewitching to death a bull and a cow, she was sentenced to one year’s imprisonment. Margaret Cooper in 1575 was found guilty of bewitching to death two men and a woman; she was sentenced to death by hanging. Alice Casselowe only faced two charges of bewitching - one ox and two pigs - but she also died. Her punishment was one year in prison, but this sentence always included four six hours sessions in the pillory and sometimes this proved fatal. Lastly, Agnes Mowser who, in 1591, was accused of bewitching a young woman named Ann Flemens, she too got one year.

In the Act Books of the Archdeaconry Court of Lewes there is an account of a trial of two women from Hove on a charge of witchcraft. On 21 May 1588 Margery Banger, widow, and her daughter Joane were cited for being “vehemently suspected to be notorious witches and common practisers of the same”. The Court ordered a trial by compurgation, where four people of good character from Brighthelmstone and Hove were required to swear that the prisoners were innocent. They were acquitted – no witchcraft there.

There are tales about witches living in many Sussex villages. In Albourne, her name was Dame Prettylegs and, apparently, she was very keen on placing spells on horses. The witch who lived in a cottage called “Jack O’Spades” on Ditchling Common also liked to stop carts which passed her cottage. No matter how hard the horses pulled, the cart would go nowhere until the spell was broken. An unnamed witch, also from Ditching, was credited with the power to turn into a hare, which she did one night, but was attacked by a group of men with dogs and bitten on the leg. The next morning the woman was seen nursing an injured leg.

It was proof such as this that the witchfinders sought. They looked for discerning marks on the body or the presence of a cat or a dog, a mouse or a toad (because in these imps the witch’s malignant power resided!) If there was no ‘devil’s brand’ or ‘familiar’, prosecutors turned to other ways of catching suspected witches, including thumbscrews, the rack or ‘floating’. This was where a priest blessed a pond or river, the accused was thrown in with their hands tied, if they floated the water was rejecting them so they were guilty. If they sank they were innocent.

Witch: unfortunate victim of ignorance and superstition; sister who had offended and been persecuted by a patriarchal medical profession; or follower of Satan, one word but a host of incompatible histories, meanings and emotions. So come the witching hour, if you are unsure, follow the old Sussex custom, recorded by H S Toms curator of Brighton Museum in the 1920s, of hanging a holed stone by the door to protect yourself against witches. 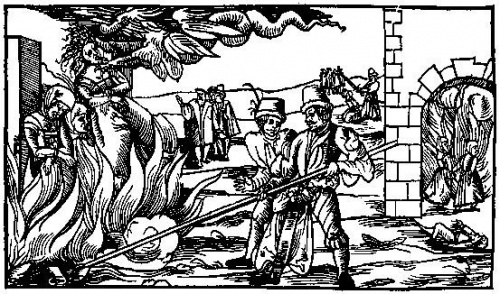 In 1542 Henry VIII passed an Act that made witchcraft a felony. Anne Boleyn was accused of sorcery and bewitchment. Under Elizabeth I a new Act punished with death the consulting of evil spirits for the purpose of bringing about death; witchcraft that caused bodily injury or harm to a person’s goods was punished by a year’s imprisonment, with exposure in the pillory, for a first offence and by death for a second. James I in 1603 made all forms of witchcraft, black or white, punishable by death. This continued to be the law until 1736. 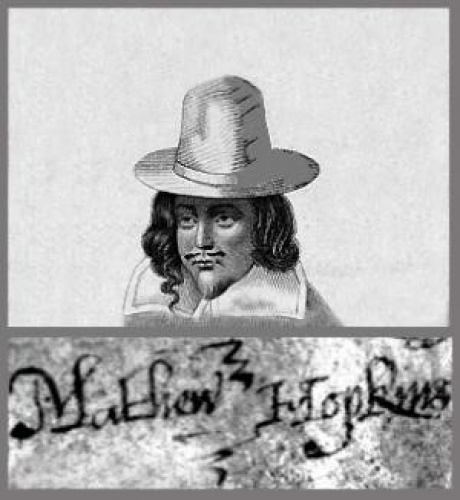 Matthew Hopkins, self-appointed Witchfinder General. There are many tales about the demise of Hopkins, but the one I like best is where, at some point during his reign of terror 1645-7, concerns about how he could identify witches without the help of the Devil began to surface. Eventually he was himself tried for witchcraft, tied and “floated” and, of course, he drowned, which I guess proves he wasn’t a witch after all!