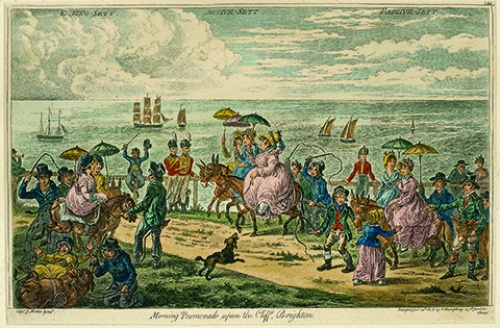 By Sarah Tobias, social & cultural historian on behalf of The Royal Pavilion

“In her imagination, a visit to Brighton comprised every possibility of earthly happiness…” wrote Jane Austen, in Pride and Prejudice, describing her character Lydia’s idea of what it would be like to walk about in the town surrounded by masses of soldiers in gaily coloured uniforms.

Indeed, there were soldiers in the town, and they must have added a grand touch of dash and colour - a pleasing sight for a young lady, perhaps? However, unless she had been formally introduced, she would not be allowed to converse with a gentleman unknown to her.

There were several military camps in Brighton. The Prince Regent enjoyed playing at soldiers, although he hastened back to the comfort of his own bed at night. The prince and many of the officers led a debauched lifestyle; not getting up before noon, then spending the day drinking, dining, visiting the theatre or races and gambling, most likely accompanied by a woman who would be paid for her services. The Gazette of October 1796 reported that the town was inundated with an estimated 300 members of the Cyprian Corps (prostitutes, camp followers). A young lady would be kept well away from these types and would not be allowed to walk about unescorted.

More sedate forms of entertainment included assemblies, dances and tea parties which were held at the Old Ship and Castle Inn hotels, and very romantic it would seem with the candles blazing in chandeliers, gently lighting up a young lady’s face as she danced the formal dances in long rows. Tea would be taken in the interval and was included in the ticket price.

Young ladies loved to shop then as well as now and St. James’s Street was the very place, with its many shops selling everything from corsets to coffee, boots to bonnets. There was an enormous selection of goods for sale in the town, including silverware and jewellery. Our young lady could have her portrait painted or take home a souvenir with the name “Brighton” stamped across it.

Then, of course, there was the attraction of the seaside itself - being thoroughly immersed in the sea by a ‘dipper’, such as the famous Martha Gunn; taking a donkey ride along the beach or venturing out to sea in a boat.

And, of course, a young lady could always sit and read the latest terrifying Gothic novel or, possibly one written by Miss Jane Austen. 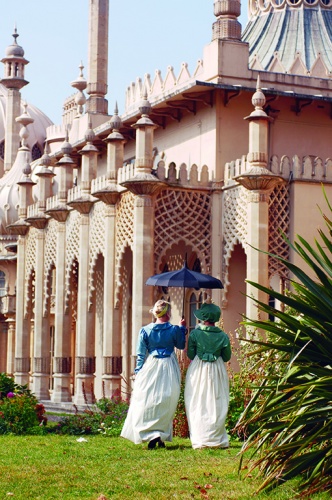